You are here: Home / Mediterranean / Nasrallah: Hezbollah will respond to Israel over Qantar’s assassination 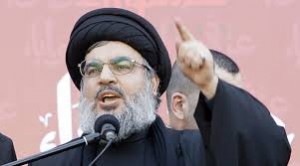 The Lebanesemovement Hezbollah says it will not leave the Zionist regime’s assassination of its high-ranking member Samir Qantar unanswered.

Hezbollah Secretary General Sayyed Hassan Nasrallah made the remarks during a televised broadcast on Monday, following Qantar’s funeral in the capital Beirut.

“We reserve the right to respond to this assassination at the time and place of our choosing. Those of us in Hezbollah will exercise that right,” the Hezbollah leader said.

“We have no doubt or question that Israel is the one which assassinated Samir Qantar, its planes fired precise missiles on an apartment (he was in),” Nasrallah said.

“If the Israelis think by killing Samir Qantar they have closed an account then they are very mistaken because they know and will come to know that they have instead opened several more,” Safieddine added.

Qantar was killed during the Israeli raid that targeted his home in the Syrian city of Jaramana near the capital Damascus early on Sunday.

He was released from an Israeli prison during a prisoner swap between Hezbollah and Israel in 2008 after serving 29 years in detention.