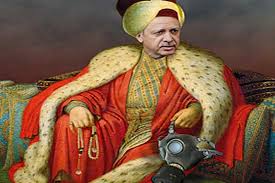 On Thursday, October 1, French President Emmanuel Macron accused Turkey of sending “Syrian jihadists” to fight in the Nagorno-Karabakh conflict between Armenia and Azerbaijan. One would least expect from a French president to candidly confess the heavily armed militants that had been touted as “moderate rebels” during nine years of Syria’s proxy war were actually “terrorists”, like reported by eurasiareview.com.

Nevertheless, Armenia’s ambassador to Moscow also corroborated that Turkey had sent around 4,000 fighters from northern Syria to Azerbaijan. Armenia also alleged Turkish military experts were fighting alongside Azerbaijan in Nagorno-Karabakh, a mountainous breakaway region of Azerbaijan run by ethnic Armenians, and that Turkey had provided drones and warplanes.

Two Syrian fighters, from Turkish-backed rebel groups in areas of northern Syria under Turkish control, told Reuters last week they were deploying to Azerbaijan in coordination with Ankara.

“I didn’t want to go, but I don’t have any money. Life is very hard and poor,” said a fighter who had fought in Syria for Ahrar al-Sham, a jihadist group that Turkey has supported.

Both men said they had been told by their Syrian brigade commanders they would earn around $1,500 a month – a substantial income for Syria, where the economy and currency have collapsed, thanks to Washington’s sanction and for squatting over vast oil and gas reserves in eastern Syria in collaboration with Kurds.

The fighter said he had arranged his assignment with an official from the Turkish-backed Syrian National Army (SNA) in Afrin, a region of northwest Syria seized by Turkey and its Syrian rebel allies two years ago.

The other fighter, from the SNA-affiliated Jaish al-Nukhba militia, said he had been told nearly 1,000 Syrians were set to be deployed to Azerbaijan. Other rebels gave figures of between 700 and 1,000.

The irony is that almost all the militant groups that had fought against the Bashar al-Assad government for nine years were Sunni jihadists, whereas Azerbaijan is an ethnically Turkic, Shiite-majority country. So practically, these jihadist mercenaries would be fighting in the Nagorno-Karabakh conflict alongside their main rivals in Syria’s proxy war.

Rather than ideological convergence, Turkish support for Azerbaijan in the Nagorno-Karabakh conflict, however, is about personal camaraderie between Erdogan and Ilham Aliyev, the longtime eccentric autocrat of Azerbaijan. Lacking grassroots support, Aliyev inherited the presidency from his father in 2003 and became a laughing stock when he appointed his trophy wife as the vice president of the country.

16% of Iran’s 83 million population is Azeri, which obviously sympathized with their co-religionists during the proxy war in Syria. Nevertheless, against the wishes and religious sentiments of the native Azeri people, Aliyev provided material support to jihadists in Syria at the behest of his Turkish patron Erdogan, which I will further elucidate later in this article, but first, let me draw the attention of the readers to Erdogan’s megalomania and militarism since the foiled coup plot in July 2016.

Firstly, the Turkish air force shot down a Russian Sukhoi Su-24 fighter jet on the border between Syria and Turkey on 24 November 2015 that brought the Turkish and Russian armed forces to the brink of a full-scale confrontation in Syria.

Secondly, the Russian ambassador to Turkey, Andrei Karlov, was assassinated at an art exhibition in Ankara on the evening of 19 December 2016 by an off-duty Turkish police officer, Mevlut Mert Altintas, who was suspected of being an Islamic fundamentalist.

Thirdly, the Turkish military mounted the seven-month Operation Euphrates Shield in northern Syria, immediately after the attempted coup plot, from August 2016 to March 2017 that brought the Turkish military and its Syrian militant proxies head-to-head with the Kurdish-led Syrian Democratic Forces and their American backers.

Fourthly, Ankara invaded Idlib in northwestern Syria in October 2017 on the pretext of enforcing a de-escalation zone between the Syrian militants and the Syrian government, despite official protest from Damascus that the Turkish armed forces were in violation of Syria’s sovereignty and territorial integrity.

Besides mounting three military incursions into northern Syria and Iraq, Erdogan has also sent thousands of Syrian jihadists, drones and military hardware in support of the Tripoli government against eastern Libyan warlord Khalifa Haftar’s military campaign in western Libya lasting from April 2019 to June 2020. After defeating Haftar’s forces in Tripoli, Turkish proxies had set their sights on Sirte but a peace process involving international mediators has since begun.

Erdogan has been acting with impunity in regional conflicts because he has forged a personal bonhomie with Donald Trump, as Trump’s son-in-law Jared Kushner and Erdogan’s son-in-law and incumbent finance minister of Turkey Berat Albayrak were business partners. So much so that the Trump administration had to comply with Erdogan’s longstanding demand to evacuate American forces from the Kurdish-held areas in northeast Syria in October last year.

Immediately following the announcement of withdrawal of US forces from northeast Syria by the Trump administration on October 6 following a telephonic conversation between Trump and Erdogan, Turkey mounted Operation Peace Spring on October 9 in which the Turkish armed forces and their Syrian proxies invaded and occupied 120 kilometers wide and 32 kilometers deep stretch of Syrian territory between the northeastern towns of Tal Abyad and Ras al-Ayn.

The recent escalation of conflict in Nagorno-Karabakh should also be viewed in the backdrop of the personal bond between Erdogan and Trump. “Ottoman Caliph” Erdogan must have intimated his Azeri Turkic protégé Ilham Aliyev that the US presidential elections were due in November and Trump might not be re-elected for a second term. Therefore, if Aliyev wanted to reclaim the Nagorno-Karabakh enclave, now was the golden opportunity.

Besides, in the run-up to the US elections in November, almost all US administrations become “lame duck” by September, consequently giving a free hand to regional powers to act with impunity and ruling out the possibility of international mediation efforts by global power-brokers, Washington in particular.

Regarding Azerbaijan’s President Ilham Aliyev’s material support to Turkey-backed militants in Syria’s proxy war, a Bulgarian investigative reporter Dilyana Gaytandzhieva authored a report for Bulgaria’s national newspaper Trud News in August 2017 which found that an Azerbaijan state airline company, Silk Way Airlines, was regularly transporting weapons to Saudi Arabia, United Arab Emirates, and Turkey under diplomatic cover as part of the CIA covert program to supply weapons to militant groups in Syria. Gaytandzhieva documented 350 such “diplomatic flights” and was subsequently sacked from her job for uncovering the story.

Similarly, a report by the Conflict Armament Research (CAR) on the Islamic State’s weapons found in Iraq and Syria was prominently featured in the news in 2018. Before the story was picked up by the mainstream media, it was first published in the Wired News in December 2017.

The Britain-based Conflict Armament Research (CAR) used to be a relatively unknown company of less than twenty employees. Its one-man Iraq and Syria division was headed by a 33-year-old Belgian researcher Damien Spleeters.

The main theme of Spleeters’ investigation was to discover the Islamic State’s homegrown armaments industry and how the jihadist group’s technicians had adapted the East European munitions to be used in the weapons available to the Islamic State. Spleeters had listed 1,832 weapons and 40,984 pieces of ammunition recovered in Iraq and Syria in the CAR’s database.

But Spleeters had only tangentially touched upon the subject of the Islamic State’s weapons supply chain, documenting only a single PG-9 rocket found at Tal Afar in Iraq bearing a lot number of 9,252 rocket-propelled grenades which were supplied by Romania to the US military, and mentioning only a single shipment of 12 tons of munitions which was diverted from Saudi Arabia to Jordan in his supposedly “comprehensive report.”

In fact, the CAR’s report was so misleading that of thousands of pieces of munitions investigated by Spleeters, less than 10% were found to be compatible with NATO’s weapons and more than 90% were found to have originated from Russia, China and the East European countries, Romania and Bulgaria, in particular.

In comparison, a joint investigation by the Balkan Investigative Reporting Network (BIRN) and the Organized Crime and Corruption Reporting Project (OCCRP) uncovered the Pentagon’s $2.2 billion arms pipeline to the Syrian militants.

It bears mentioning that $2.2 billion was earmarked only by Washington for training and arming the Syrian militants, and tens of billions of dollars worth weapons and ammunition that the oil-rich Gulf States pumped into Syria’s proxy war have not been documented by anybody so far.

Damien Spleeters of the Conflict Armament Research (CAR) authored another report [6] in November 2018, in which he exposed that South Sudan’s neighbors, Uganda in particular, had breached an arms embargo by funneling East European weapons into the South Sudan conflict, but expectedly whitewashed the crimes of Western powers in creating the conflict.

But in 2013, only two years after gaining independence, a civil war erupted in multi-ethnic South Sudan between Dinka tribal group of South Sudanese President Salva Kiir and Nuer rebels led by warlord and former Vice President Riek Machar, and triggered one of the world’s largest humanitarian crises. Millions of South Sudanese sought refuge in displacement camps in South Sudan and neighboring countries, after purportedly “being liberated” from Sudanese oppression and tyranny by the neocolonial powers.