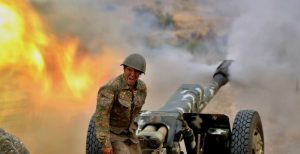 Clashes continue for a fourth day over Azerbaijan’s breakaway region of Nagorno-Karabakh despite growing international calls for an immediate end to deadly clashes between Azerbaijani and Armenian forces, like reported by rferl.org.

Both sides confirmed on September 30 attacks in several directions along the so-called Line of Contact that divides them, with fighting spreading well beyond the borders of the enclave and threatening to spill into all-out war between the former Soviet republics.

“Intense fighting continues,” Azerbaijan’s Defense Ministry said in a statement on September 30, adding that military operations were under way “along the entire front line.”

With dozens killed and injured, the fighting has escalated to some of the worst seen since a 1994 cease-fire was agreed.

The UN Security Council late on September 29 strongly condemned the use of force and backed Secretary-General Antonio Guterres’ call for an immediate halt in the fighting, a de-escalation of tensions, and the urgent return to meaningful negotiations.

However, both Azerbaijan and Armenia brushed off the suggestion of peace negotiations, accusing each other of obstructing the process.

“The Armenian prime minister publicly declares that Karabakh is [part of] Armenia, period. In this case, what kind of negotiating process can we talk about?” Azerbaijani President Ilham Aliyev told Russian state TV channel Rossia 1.

In turn, Armenian Prime Minister Nikol Pashinyan told the broadcaster that Azerbaijan must “immediately end [its] aggression toward Nagorno-Karabakh and Armenia,” calling it “an existential threat to our nation.”

Azerbaijan and Armenia have been locked in conflict over Nagorno-Karabakh since the waning years of the Soviet Union. They fought a war that ended in 1994 in an uneasy cease-fire and an estimated 30,000 killed.

Since then, the region has been under the control of ethnic Armenian forces. The region’s 1991 declaration of independence has been recognized only by Armenia, which is its sole outlet to the outside world.

Sporadic violence has broken out over the years, and internationally mediated negotiations with the involvement of the OSCE’s so-called Minsk Group, cochaired by France, Russia, and the United States, have failed to achieve a resolution.

It wasn’t immediately clear what caused the long-simmering conflict to erupt anew on September 27, with the sides fielding helicopters, drones, tanks, and artillery and accusing each other of firing into their territory outside of the Nagorno-Karabakh area.

The clashes are the heaviest since at least 2016 and have reignited concern over stability in the South Caucasus, a corridor for pipelines carrying oil and gas to world markets. The fighting has also threatened to draw in Russia and regional power Turkey.

Separatist fighters in Nagorno-Karabakh said that 84 servicemen have been killed over the past four days, while Azerbaijan reported the death of 12 civilians on its side but released no figures on its military casualties.

In a statement on September 30, Human Rights Watch (HRW) urged all armed forces fighting over Nagorno-Karabakh to “respect the absolute ban against targeting civilians or carrying out attacks that indiscriminately harm civilians.”

“All sides should remember that attacks targeting civilians are serious violations of international humanitarian law and constitute war crimes…even if they are carried out in reprisal for indiscriminate attacks by the adversary,” said Hugh Williamson, Europe and Central Asia director at the New York-based watchdog.

In what would be a major escalation of the violence, Armenia said on September 29 that one of its warplanes was shot down by a fighter jet from Turkey, killing the pilot. Both Azerbaijan and Ankara, its closest ally, denied this.

In an interview with the BBC, Pashinian accused Turkey of being “a participant in the hostilities,” saying Turkish instructors and officers were directly involved in the fighting — an allegation that has not been independently confirmed.

Earlier in the day, Fahrettin Altun, a spokesman for the Turkish president, said Turkey “will be fully committed to helping Azerbaijan take back its occupied lands and to defending their rights and interests under international law.”

Meanwhile, Russia and Western nations have called for restraint, with the Kremlin urging all countries, especially Turkey, to “do everything to convince the opposing parties to cease fire and return to peacefully resolving the conflict by politico-diplomatic means.”

Pashinian spoke by phone with Russian President Vladimir Putin on September 29 and said that, at this point, he was not considering asking for help under a post-Soviet security treaty, though he reserved the right to do so.

“Armenia will ensure its security, with the participation of the Collective Security Treaty Organization (CSTO) or without it,” he said, referring to a collective security agreement signed by six post-Soviet states, including Russia.

Russia is among the largest supplier of weaponry to both Azerbaijan and Armenia. It also has a military base in Armenia.