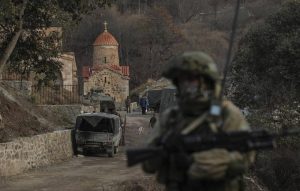 Several people were killed in an apparent attack by Azerbaijani forces at a military base in the restive Nagorno-Karabakh region, like reported by dw.com.

The Russian defense ministry, which has deployed peacekeepers to Nagorno-Karabakh to monitor the peace accord, also reported a violation of the cease-fire.

“One case of cease-fire violation was reported on December 11 in the Hadrut district,” it said in a statement.

The Armenian Defense Ministry confirmed the Azerbaijani army had attacked again, close to two villages in the south of Nagorno-Karabakh, adding that it was taking “appropriate measures.” The ministry did not provide further information.

In response, Azerbaijani President Ilham Aliyev blamed Armenia for the new clashes and threatened to “break its head with an iron fist.”

“Armenia shouldn’t try to start it all over again,” Aliyev said during a meeting with top diplomats from the US and France. ”It must be very cautious and not plan any military action. This time, we will fully destroy them. It mustn’t be a secret to anyone,” he said.

Fighting in the region broke out in late September, leaving more than 5,600 people dead on both sides. Azerbaijani forces pushed deeper into Nagorno-Karabakh, forcing Armenia to accept the Russia-brokered deal on November 10.

The peace deal allowed Baku to reclaim control over vast swathes of Nagorno-Karabakh and surrounding lands previously held by Armenian forces for more than a quarter century.

The deal prompted protests in Armenia calling for Prime Minister Nikola Pashinyan to step down. Pashinyan described the deal as necessary to prevent Baku from taking over the whole of Nagorno-Karabakh.

Azerbaijan held a celebratory military parade on Thursday that was attended by Turkish President Recep Tayyip Erdogan and involved more than 3,000 troops.