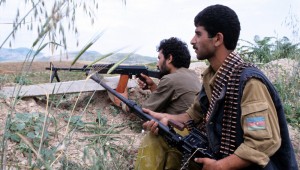 Heavy fighting has broken out between regional rivals Armenia and Azerbaijan in the tense, separatist region of Nagorno-Karabakh, during a clash serious enough to warrant the attention of Russian President Vladimir Putin.

At least one child is believed to have been killed in the fighting between the two former Soviet republics that broke out late Friday. Each side blames the other for starting the fighting, and both sides say the other has sustained heavy losses.

Russia’s President Putin on Saturday urged both sides to cease firing and “show restraint,” according to a Kremlin spokesman.

The Nagorno-Karabakh region is part of Azerbaijan, but has been under control of Armenian forces since 1994, when the two sides ended their war over the territory. Despite years of negotiations, the situation in the area remains volatile.

The two sides are separated by a demilitarized buffer zone, but each side has accused the other of violating the neutral zone.

The Armenian Defense Ministry says it has brought down an Azeri helicopter, but Azeri officials dispute that claim.