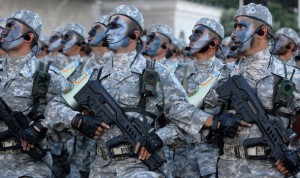 While the international community is focused on the hot points like Syria, Iraq, Palestine and Afghanistan, the Nagorno-Karabakh conflict – frozen in the crossroad of Europe and Asia for many years – continues to remain in the background.

However, this situation is quite dangerous and could result in igniting the conflict into a more severe form and to new scale. One should not forget that the Nagorno-Karabakh conflict itself has many years of “experience” and separatist regime’s actions in re-igniting this fire will be a source of danger and instability not only for Azerbaijan, but also for neighbor countries.

It is no secret that a complete lack of control reins in those areas and as contemporary history shows, such an environment is favorable for the proliferation of terrorism and other dangerous tendencies. Ideologists never miss such an opportunity.

Armenia certainly is not interested in achieving peace in Nagorno-Karabakh, which it turned to a conflict zone, and holds quite a destructive position that is shattering the peace process.

Serzh Sargsyan, who heads a military dictatorship, long ago demonstrated that he doesn’t recognize international law and is politically illiterate, as his criminal acts in the occupied territories have become public. Various terrorist and extremist groups are conducting training operations in these areas under the auspices of the Armenian government.

The bloody conflict, which emerged over Armenia’s illegal territorial claims against neighbor Azerbaijan, resulting in the occupation of 20 percent of the Azerbaijani territories, has not been settled yet even though over 25 years have been passed since. UN Security Council resolutions on the unconditional return of Azerbaijani territories have not yet been implemented and the international community even does not think to exert pressure on Armenia in this regard.

Impunity and indifference make the Armenian government even more rampant and constant violations of the ceasefire reached in 1994 and repeated provocations on the front line have become a daily occurrence. Such a situation is in full compliance with a “frozen” status of the conflict.

Taking a look to the history, one can see that no conflict remains frozen and ignites into a more severe form after a certain amount of time.

The efforts of the OSCE Minsk Group, which is co-chaired by the United States, France and Russia and is engaged in the resolution of the conflict, have not yielded any results for over 20 years. In the meantime, the status quo has reached its limit. It seems that the establishment of peace and security in the South Caucasus region, where political interests intricately cross, isn’t of interest to some.

In this case, the countries of the region should take the initiative and think about creating new format for the settlement of the conflict. It should be stressed that the Nagorno-Karabakh conflict should be seen as a regional threat and its solution should be implemented as part of antiterrorism operations. The Armenian occupying forces must withdraw from Azerbaijani territories and a legitimate government must be restored on these lands. Otherwise, the world will face more severe and dangerous conflict.