You are here: Home / West Asia / Nagorno-Karabakh conflict can be solved by including Turkey, Iran in process 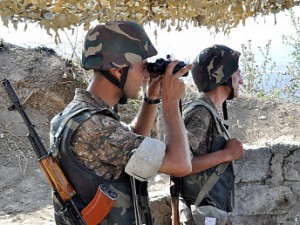 Resolution of the Karabakh conflict on the basis of a compromise is possible only within the framework of collective scheme of interaction between the major states in the region – Russia, Turkey and Iran, Russian political scientist, associate professor of St. Petersburg State University, candidate of historical sciences Alexander Sotnichenko told Trend Sept. 25.

He made the remarks commenting on the upcoming meeting of foreign ministers of Azerbaijan and Armenia in the lobby of the UN General Assembly in New York.

He said that no major world power wanted to submit a real compromise program of solution to the crisis yet and, therefore, took no responsibility for work with the parties.

“Russia is the most important partner of Armenia, both a political and economic one,” Sotnichenko said. “Russian investments ensure the functioning of the Armenian economy in the state of almost a regional blockade. Iran, for its part, also has good relations with Armenia while remaining an important partner of Azerbaijan. Turkey has a big influence in Azerbaijan. The problem can be solved in conjunction given a joint search for solutions between Moscow, Tehran and Ankara.”

He went on to add that the United States is generally satisfied with the state of frozen conflict, moreover, there is quite a strong Armenian lobby there, and the White House doesn’t want to quarrel with it.

“The European Union, judging by the activity of the Minsk Group, isn’t interested in the early resolution of the conflict, either,” the expert said. “Russia is also generally satisfied with everything, but, unlike the other sides, Moscow has real leverage.”

The conflict between the two South Caucasus countries began in 1988 when Armenia made territorial claims against Azerbaijan. As a result of the ensuing war, in 1992 Armenian armed forces occupied 20 percent of Azerbaijan, including the Nagorno-Karabakh region and seven surrounding districts.

The two countries signed a ceasefire agreement in 1994. The co-chairs of the OSCE Minsk Group, Russia, France and the US are currently holding peace negotiations. Armenia has not yet implemented the UN Security Council’s four resolutions on the liberation of the Nagorno-Karabakh and the surrounding regions.