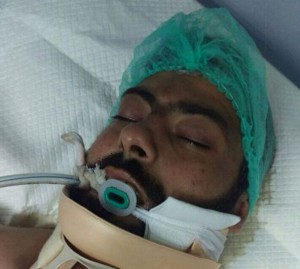 A commander in Iran’s paramilitary Basij force has died from injuries suffered in clashes against rebel forces in Syria’s Quneitra province near Israel’s border in the latest death of an Iranian officer in the war-torn country.

The TV station cited Iran’s semi-official Fars news agency as saying that Hamid had been injured fighting against rebels in Quneitra, where Hezbollah and Syrian regime forces have been engaged in back-and-forth battles with armed opposition groups.

The agency added that Hamid had performed a coordinating role among the regime’s auxillary National Defense Forces militia groups active in the border region.

The Iranian officer’s funeral will take place in southwestern Iran’s Khuzestan Province after the arrival of his body from Syria.

A reporter in the state-controlled Islamic Republic of Iran Broadcasting (IRIB) originally reported Hamid’s death on an Instagram post late last week, which he promptly took down and replaced with a picture of the injured officer in a hospital.

Hamid’s killing comes on the heels of a number of other high-profile Iranian officer deaths in the past two weeks.

On Sunday, reports emerged that Iranian Revolutionary Guard Corps (IRGC) commander Muslim Kheizab had been killed while serving an “advisory” mission in Syria.

Last week, Iran confirmed the deaths of General Farshad Hasounizad, the former head of the IRGC’s elite Saberin Brigade, and Hamid Mokhtarband, the former chief-of-staff of the 1st Brigade of Iran’s crack 92nd Armored Division, which is considered the country’s top armored unit.

Their deaths followed the dramatic killing of IRGC general Hussein Hamdani, who was one of the IRGC’s leading generals and the country’s top military advisor in Syria.

IRGC’s public relations department said Hamdani had been killed by “members of the ISIS terror group” in Aleppo’s northern outskirts, while some statements in the Iranian media as well as pro-Syrian regime outlets said he had died in a car crash.

Hamdani—who commanded the IRGC’s Rassoulollah Corps responsible for security in Tehran—played a key role in the Iranian government’s suppression of the Green Movement protests that rocked Iran between 2009 and 2010.

In a 2014 article, The Wall Street Journal said that Hamdani was a “recognized authority and strategist in Iran for fighting separatist movements and guerrilla urban war.”