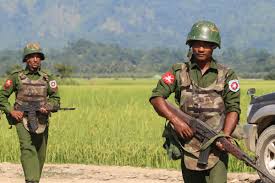 Three Myanmar army soldiers were killed and three were wounded on Wednesday when members of the Ta’ang National Liberation Army (TNLA) ambushed a convoy of seven army trucks in northern Shan State’s Hseni Township, according to local sources and irrawaddy.com.

Seven civilians also sustained minor injuries in the attack, which occurred as the convoy was leaving Hseni Town, Sai Oo Kham, a Lower House lawmaker from the town, told The Irrawaddy.

“As soon as the attack broke out in the town, I went to meet the township authorities to discuss how we could help residents,” Sai Oo Kham said after visiting the site of the attack with local officials.

“I saw the bodies of two dead soldiers, and three others who were wounded,” he said, adding that he called an ambulance to help attend to the wounded. He said that later another ambulance took away the body of a third soldier who had been killed.

The attack began at 6:30 a.m. local time and lasted for two hours.

Brigadier General Zaw Min Tun, a spokesperson for the Myanmar military (or Tatmadaw) confirmed to The Irrawaddy that a number of soldiers had been killed and wounded, but did not provide precise casualty figures.

According to TNLA spokesman Major Tar Aike Kyaw, the ethnic armed group planned the attack in advance. He claimed that two Myanmar army trucks were destroyed in the attack.

“The main reason we attacked them is that they [the Tatmadaw] have continued to deploy troops and launch military offensives in our area of control. Therefore, we had to attack them,” he said.

“These seven army trucks were leaving Hseni and planned to travel into our zone of control. Therefore, we ambushed them to block them from entering our area,” he said.

According to Sai Oo Kham, the TNLA deployed many fighters in Hseni Town prior to the attack. He speculated that if the TNLA forces had not encountered the convoy, they would likely have attacked the Myanmar army base in the town.

“For the town, we could say this was both positive and negative; it was good that they left the town early after attacking the army trucks. If they had decided to attack the Tatmadaw base, there would have been serious fighting in the town. That would have been terrible,” Sai Oo Kham said.

After the two-hour attack, the TNLA troops withdrew into the town before heading back into the surrounding jungle, pursued by Myanmar army troops.

The Myanmar army recently allowed a unilateral ceasefire it had declared in five military regions, including Shan State, to lapse. An alliance of three ethnic armed groups comprising the TNLA, the Arakan Army and the Myanmar National Democratic Alliance Army announced their own ceasefire effective until the end of the year.

The TNLA has warned that the Tatmadaw’s decision not to extend its ceasefire could result in an escalation in fighting in northern Shan State.

The Myanmar military and members of the Northern Alliance, which includes the three ethnic armed groups plus the Kachin Independence Army, are due to meet for a third time in Kengtung, Shan State this month, though the precise date has yet to be agreed.

The two sides are due to negotiate conditions for the signing of bilateral ceasefire agreements between the members of the Northern Alliance and the Myanmar government. There are many outstanding areas of disagreement that would need to be resolved before any agreements could be signed, however.