You are here: Home / Mediterranean / Mustafa Barghouti: ‘The Third Intifada has already begun‘ 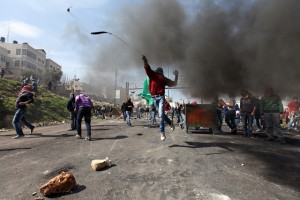 The Palestinian Authority must cease all security cooperation with Israel and support the upsurge of Palestinian “people’s resistance” in Jerusalem and the West Bank in what is now being described by some as the “Third Intifada,” independent Palestinian MP Mustafa Barghouti has told Middle East Eye.

Speaking to MEE, Barghouti said the Third Intifada “has already begun,” following deadly clashes and protests in the occupied West Bank and Jerusalem over the past few weeks, including the fatal shooting of two Palestinian teenagers in recent days and the killing of several Israelis by Palestinians.

The recent violence erupted after Palestinians clashed with Israeli security forces last month in the al-Aqsa compound, Islam’s third holiest site, that is also holy to Jews who call it the Temple Mount. Tensions had begun to mount following an increase in Jewish visitors during the Jewish New Year with relations already fraught due to ongoing settler violence and fears over the status quo at al-Aqsa.

Barghouti’s comments follow Palestinian President Mahmoud Abbas’s threat at the UN General Assembly last week to withdraw from all agreements signed between the PA and Israel over the past two decades.

Barghouti, who is leader of the Palestinian National Initiative, said that the PA must end its controversial security co-ordination pact with Israel that sees it assuming a policing role against other Palestinian factions in the West Bank.

“The Palestinian resistance must be supported by the Palestinian Authority… and must also immediately cease security co-ordination with the [Israeli] occupation,” he told MEE.

“The Third Intifada has already begun. There must be no more negotiations with Israel as they have breached all agreements in the past.”

Abbas told the UN General Assembly last Wednesday that “[the Palestinian Authority] will not remain the only ones committed to the implementation of …agreements [with Israel],” further adding that “Israel must assume all of its responsibilities as an occupying power” without specifying what powers the PA intended to relinquish.

However, he also said on Tuesday: “We [the PA] do not want a military and security escalation with Israel,” suggesting that the PA may be willing to engage in further talks with the Israelis.

In light of the current violence, some armed Palestinian factions, such as Islamic Jihad, have made threats to resume attacks and suicide bombings against Israeli targets which would represent a marked escalation in the current crisis.
In an attempt to de-escalate tensions, the Israeli army released the results of their preliminary investigation into the fatal shooting yesterday of 13-year-old Abdel Rahman Obeidallah. A senior army officer has described the tragic shooting as “unintentional”.
The army investigation confirmed that the teenager was shot with a .22 calibre round by an Israeli sniper who was aiming at an adult standing next to him, without specifying what that adult was doing.

However, this account conflicts with another spokesperson who initially said that no live fire was used by the Israeli army during the incident. B’tselem, an Israeli human rights organisation that documents Israeli government abuses in the Occupied Territories, denounced the death of Obeidallah and condemned the use of live rounds against Palestinians, saying that .22 calibre rounds were “a lethal weapon, which the Israeli authorities present as a reasonable tool…in dealing with demonstrations”.

The Israeli army report is unlikely to reduce tensions as Israeli Prime Minister Benjamin Netanyahu has announced a raft of new punitive measures to crack down on Palestinian dissent.

Netanyahu has confirmed that Israel would expedite the demolition of Palestinian homes alleged to have been involved in armed attacks, expand the controversial measure of administrative detention and ban people from entering Jerusalem’s Old City.

Yesterday, the homes of two Palestinians were demolished, even though they were shot and killed by Israel’s security forces.

In a statement, Hamas’ spokesperson, Sami Abu Zuhri, said that stabbings and attacks against Israeli settlers and security forces were “a natural response to [Israeli] occupation and settler crimes against the al-Aqsa Mosque and the Palestinian people” further adding that “the Palestinian people cannot sit idly by while the Israeli crimes continue amidst international silence”.