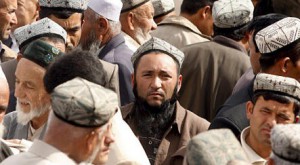 China has arrested a member of its mostly Muslim Uighur ethnic minority who planned a bomb attack after returning from a training camp in Syria, state media said on Monday.

State broadcaster CCTV’s report was based on a prison confession from the man it identified as “Aikebaier”, which a Uighur rights group dismissed as “propaganda”.

CCTV said that Aikebaier had travelled to Syria via Turkey sometime after 2013 and received “bomb-making training”.

It was not clear when he returned to China, but he was shown in a prison vest with a shaved head, saying that he planned an explosive attack on a shopping centre in the northern city of Shijiazhuang.

“I would like to say to my mother: please forgive me,” he said, breaking into tears.

The report said the man had been “caught” but gave no details of when he was arrested, or what charges he faces.

Uighurs speak a Turkic language and many complain of religious and cultural discrimination in Xinjiang, their homeland in northwestern China, which has seen escalating violence in recent years.

Beijing blames the unrest on Islamist terrorist groups seeking independence for the region, although many analysts are sceptical.

“For the sake of their family’s safety, arrested Uighurs have no other choice than to become propaganda tools for the Chinese government,” he said in a statement.

A number of Uighurs have attempted to flee China in recent years, in what rights groups say is an attempt to escape repression.

Thailand this month deported some 100 Uighurs to China, in a move which sparked protests in Turkey and was condemned by the United Nations refugee agency.

Chinese state media said that an unspecified number of those deported were travelling to “take part in jihad”.