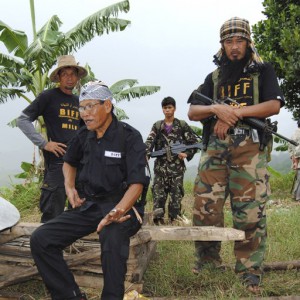 Five radical Muslim religious preachers have bolted the Bangsamoro Islamic Freedom Fighters (BIFF) and formed their own revolutionary group perceived to be more radical, being inspired by the ideology of the notorious Islamic State in Iraq and Syria (ISIS).

Calling themselves as the genuine “Muashasin,” an Arabic term meaning “founders,” they declared the new revolutionary group as the counterpart of ISIS in southern Mindanao.

Local officials in three towns in Maguindanao confirmed the preachers’ separation, including that of their followers, from the BIFF, during a gathering recently.

The Muashasin have pledged allegiance to the ISIS and adopted the latter’s infamous black flag as the group’s revolutionary banner.

Last week, the BIFF leadership distributed a press statement confirming that the clerics–Hassan, Abdulmalik Esmael, Bashir Ungab, Nasser Adil and Ansari Yuno– have left to form a breakaway faction focused on establishing an Asian Islamic caliphate allied with the ISIS.

Local residents said Salahudin and Esmael, both of Maguindanaon lineage, were trained by the slain Malaysian terrorist Zulkifli bin Hir, known as Marwan, in the manufacture and handling of improvised explosive devices (IEDs) in Mamasapano town southwest of Maguindanao.

They are both from Shariff Saidona town in Maguindanao, according to local officials.

“They are no longer with the BIFF and the BIFF has nothing to do with their activities now,” BIFF’s spokesman, Abu Misry Mama, said.

Relatives said the five jihadists broke away from the BIFF after forging alliances with the Maute terror group in the first district of Lanao del Sur and the more notorious terrorist Abu Sayyaf Group (ASG) in Sulu.

The group is headed by brothers Abdullah and Omar Maute.

The brothers studied Islamic theology while employed as OFWs (overseas Filipino workers) in the United Arab Emirates before they established their so-called “black flag movement” in Lanao del Sur.

The BIFF was founded in late 2010 by Ustadz Ameril Ombra Kato, who started as commander of the MILF’s 105th Base Command.

Kato died of a lingering illness in 2014 at Datu Saudi town in Maguindanao, after half of his body was paralyzed as a result of a stroke two years before.

Like the ASG, the BIFF also proclaimed loyalty to the ISIS and incites people in areas where it operates to hate non-Muslims and treat them with animosity for being kuff’r, or unbelievers of the Islamic teachings.