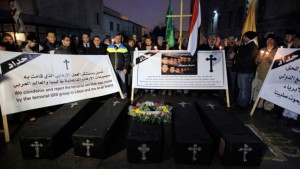 Relatives of the Coptic Christians beheaded last month by jihadists in Libya – their deaths immortalized in a gory video set against the backdrop of a Mediterranean beach – are facing new extremist-Muslim violence as they seek to build a church to honor their murdered loved ones.

An angry mob in the Upper Egyptian village of al Our – proposed site of the church because it was home to 13 of the 21 Christians murdered in the mass “beachfront” decapitation – descended on the community’s current church after the midday Islamic prayer Friday and chanted that they’d never allow construction of the new place of worship to begin, witnesses told Egyptian activists in the U.S.

Things turned far uglier after nightfall, the witnesses said, as a smaller number of individuals threw Molotov cocktails and stones at the church, injuring several people, and setting cars ablaze, including one that belonged to a relative of one of the victims of the Libyan massacre.

“The police came, but after the attack,” said Mina Abdelmalak, a Coptic Christian living in Washington who is in close contact with the witnesses to the events in al Our. “There were already cars on fire. People had been bloodied. Stones and bricks had been thrown.”

Some protesters also appeared at the family home of massacre victim Samuel Alham Wilson, but, in a gesture that provided some hope, were chased off by Muslim neighbors when the protestors started throwing stones.

Copts are the native Christians of Egypt, accounting for about 10 percent of the country’s 88 million people.

While they have traditionally faced varying levels of persecution in the mainly Muslim country, the Copts of al Our ­– a village on the Nile about 125 miles south of Cairo – have additionally been in deep mourning since the Islamic State released its video Feb. 15 showing the beheading of the Christians – 20 of them Copts, the other from Ghana.

The 13 from al Our – like their fellow Christians with whom they died – had gone to Libya to seek work because their poverty-stricken home communities offered none or little that was viable.

Abdelmalak told FoxNews.com that the al Our Copts had sought permission from Egyptian President Abdel Fattah al-Sisi to build a church to honor the loss of their loved ones and the others who died with them.

Until recently, such high-level permission was necessary to carry out even minor repairs on churches in Egypt, while similar permissions are not necessary for the building of mosques.

But the Friday attacks on the Copts have driven a further wedge between the village’s Christian and Muslim communities – and are seen as particularly insensitive in light of the losses suffered because of the massacre in Libya.

“This is a classic issue in Egypt,” said Abdelmalak. “Even after you struggle to get permission from the president to build a church, you still have to face the mob, which rejects the idea of having a church built in their neighborhood.”

A Coptic news Facebook page displays pictures of men with facial injuries it says they suffered during the attack on the church.

“I fear that the security (services) will as usual issue a report saying that the situation in the village (is so bad) that (they) will not (now) allow us to build a new church,” says the author of the entry, according to a translation from Arabic.

After receiving presidential permission for construction, the Coptic community bought some land, but local Muslims objected to its positioning at the entrance to the village, according to Daily News Egypt, which publishes in English.

A new location outside the village is now eyed following a meeting between Muslim and Coptic residents that the regional governor brokered.

“This has been effectively imposed on the Coptic residents,” Abdelmalak said. “Dictates to the Christian community are always presented as agreements.”

A report in Arabic in the al-Masry al-Youm newspaper said “tens of residents” protested against the building of the new church, despite presidential approval for the project.

“Witnesses from the village said protesters repeated chants saying, ‘Whatever you do, there won’t be a church on the ground.’”

Abdelmalak said the words in original Arabic rhymed and would have instilled fear by sounding like the aggressive chants heard in European soccer stadiums.

He added that police arrested several members of the mob, but released them a few hours later.