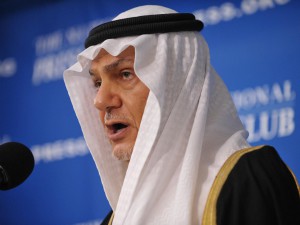 Muslim countries have a responsibility to play a primary role in combating terrorism, a prominent Saudi Arabian prince has said.

Prince Turki al-Faisal, an influential and outspoken member of the Saudi royal family, made his comments as the oil-rich kingdom hosts an 18-day military exercise with 20 members of a recently announced Islamic counterterrorism alliance.

Speaking to reporters in Abu Dhabi, Prince Turki said: “I consider this a leading and commendable step that should have happened sooner and thank God it has taken place”.

“It’s no secret, unfortunately, that in our world today the majority of terrorism-related acts, its victims are Muslim,” he said. “Therefore, it is our responsibility as Muslim countries to play the primary role in fighting this disease that has impacted us all.”

The Prince, who headed Saudi Arabia’s General Intelligence Directorate for more than two decades until September 2001, added he has not seen any indication from Saudi leaders that if Saudi troops were deployed to Syria, they would also fight President Bashar al-Assad’s regime.

Notably missing from the alliance of Muslim-majority countries – which includes Pakistan, Sudan, Jordan and neighbouring Gulf states – is Iran. Tensions between the kingdom and Iran have strained even further following the execution of Sheikh Nimr al-Nimr, which triggered protests in Iran and the ransacking of the Saudi Embassy there. This led to the two counties severing both diplomatic and trade ties.

Prince Turki said “the ball is in the Iranian court” when it comes to any hope of improving ties.

“The kingdom of Saudi Arabia has expressed publicly that Iran’s interference in the affairs of Arab states is a situation that is unacceptable,” he said.