Those who convert to Islam are four times more likely to become terrorists than those who are born Muslims, according to a study by the Henry Jackson Society 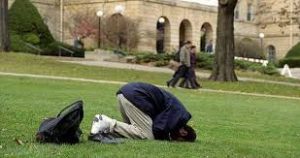 Newly converted Muslims can take as little as four months to commit terrorism offences, according to the study and like reported by policeprofessional.com.

The study also highlighted a link between highly segregated Muslim areas and terrorism, as the more integrated areas had lower offending rates.

Nearly half of all British Muslims (48 per cent) live in neighbourhoods where Muslims form less than a fifth of the population. However, just 38 per cent of terrorists came from these neighbourhoods.

A total of 269 terrorists were identified between 1998 and 2015, 76 per cent of whom were previously known to authorities.

Leicester, which has a large but well-integrated Muslim population, has produced only two terrorists in the past 19 years.

London and Birmingham were found to be the main sources of terrorists, producing 117 and 39 respectively.

A tenth of Britain’s terrorists come from just five council wards in Birmingham, more than the whole of West Yorkshire, Lancashire and Greater Manchester put together.

The poorer areas produced the most terrorists, with 76 per cent coming from neighbourhoods with above-average deprivation while 38 per cent were unemployed.

Author of the report Hannah Staurt said: “This study identifies some significant new challenges for the authorities, including keeping track of a new generation of terrorists. I hope it will also tackle some of the myths that are prevalent in this area.”

Ahead of the report’s launch, UK’s most senior counter-terrorism officer revealed 13 potential terror attacks against Britain have been prevented since the murder of Lee Rigby in May 2013.

Assistant Commissioner Mark Rowley also confirmed there were at least 500 live counter-terror investigations ongoing during that period at any time.

The figures were disclosed as Mr Rowley launched an appeal – Action Counters Terrorism – for the public to report any suspicions and act on their instincts.

Information from the public has assisted officers in a third of the most high-risk investigations, figures show.

It was also revealed that investigators have been making arrests at a rate of almost one a day since 2014.

Mr Rowley said the public’s contribution has been “extraordinary” so far.

“Some of that information is a change in someone’s behaviour, some of that’s about suspicious activity,” he added.

“Sometimes that public information has actually started an investigation. Other times it’s part way through and it corroborates some things or adds to things we already know.

“The public are making a great contribution which is critical to us all working together to protect ourselves from terrorism.”

Despite foiling a number plots since 2013, Mr Rowley stressed that the terror threat in the UK remains severe – as it has done for two years – meaning an attack is “highly likely”.

He warned police currently face a range of threats and challenges such as encrypted communication methods, propaganda and various attack methods.

“Now we worry about everything from fairly simple attacks with knives or using vehicles all the way through to the more complex firearms attacks,” Mr Rowley said.

“All of that means that our job remains difficult.”

Although so-called Islamic State (Daesh) poses the greatest threat, Mr Rowley also noted it would be wrong to “assume that the terrorist threat is simply about Daesh or simply about what’s happening in Syria”.

In the year to March, the anti-terrorist hotline received more than twice the number of calls compared to the previous 12 months, with 22,000 people ringing in.

As part of the Action Counters Terrorism campaign, a podcast has been set up which reveals previously untold stories of how terror attacks in the UK were prevented, with accounts from detectives, bomb disposal and surveillance officers.

Mr Rowley said the aim of releasing this new material was to give an insight into how terrorists might plan their attacks and encourage the public to report any suspicions.

“If it turns out to be a call where you made it with good intent but actually there was no problem at the end of it, that’s fine,” he added.

“We’d rather have many calls like that, rather than miss out on the critical one that helps us stop an attack.”

A Civil Nuclear Constabulary (CNC) spokesperson said: “The CNC supports the national Action Counters Terrorism campaign, which launches across the country Monday (March 6) and will run until March 31.”