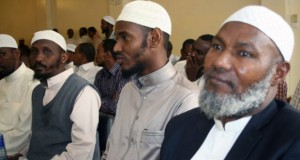 Religious leaders from the Somali community across the country have launched a major campaign against radicalisation to counter Al Shabaab propaganda that has lured many youths to join the militant group.
Speaking Sunday in Nairobi after holding a consultative meeting, the religious leaders said they will intensify awareness campaigns within their local communities against misleading narratives from Al Shabaab. “Minimising radicalisation and violent extremism requires all stakeholders to play their role effectively including government, political and religious leaders.
We want to do our part to ensure the success of this endeavour,” said Sheikh Mohammed Shakuul, a religious leader and businessman in Nairobi’s Eastleigh estate. He added: “The real aim of Al Shabaab is to spark religious conflict in Kenya between Muslims and Christians. Kenyans of different faiths should not fall into that trap.
We have lived together in harmony for many years.” The meeting brought together religious leaders from many parts of the country including hotspots like Garissa, Wajir, Mandera, Isiolo and Mombasa.
However, the leaders expressed concern that despite their past efforts to counter Al Shabaab propaganda, the government has stabbed some of them in the back by including them in the list of persons whose bank accounts have been shut over alleged links with the militant group
They cited the inclusion of Sheikh Mohammed Abdl Umal and Sheikh Mohammed Sheikh Osman in the list even though they have been at the forefront in discrediting Al Shabaab propaganda. Both are influential religious leaders in the Somali community. Sheikh Mohammed Osman dismissed claims that Muslim religious leaders are not doing enough to counter radicalisation of youth, saying their efforts are being downplayed and unappreciated. “We have been working quietly and tirelessly within our communities against Al Shabaab who have caused much harm to Islam and Muslims.
Those criticising us are not aware of our activities. The radicalisation problem could have been far worse without efforts of many muslim religious leaders,” he said. In addition, the clerics cautioned the government against blanket measures such as shutting down of bank accounts of individuals and companies without following due process of investigations, saying it undermines the cooperation and goodwill needed to fight Al Shabaab. The leaders also said that it was unfair to accuse mosques of fuelling radicalisation of youths in Kenya.
“Mosques are bricks and cement and they commit no mistake. If there are specific individuals suspected of committing illegal things in mosques, let them be arrested and prosecuted. Blanket blaming of mosques is not good,” they said in a joint statement.
About the government amnesty for Kenyans who are willing to abandon Al Shabaab, the leaders said it should be handled carefully to lure as many youths as possible from the militant group and not scare them away. “As religious leaders, we request the amnesty period to be increased from the current 10 days in order to win many youths over. We are willing to play our role to ensure that the returnees are taken through appropriate de- radicalisation programmes,” said sheikh Osman.