Milos Zeman explained the Brotherhood lacked the resources to launch a military invasion of the continent so was sending waves of migrants as an alternative force. 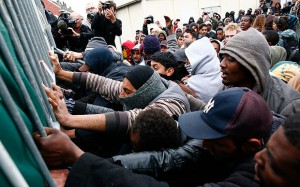 The Czech president has claimed the migration crisis in Europe is the result of a plan by the Muslim Brotherhood to “gain control of Europe”.

Milos Zeman explained the Brotherhood lacked the resources to launch a military invasion of the continent so was sending waves of migrants as an alternative force.

“It cannot declare war on Europe, it does not have enough forces for it, but it can prepare a growing migrant wave and gradually gain control of Europe as it has been happening in some West European cities that police are afraid to enter at night,” Mr Zeman told Czech Radio.

The president cited the Moroccan foreign minister and a crown prince from the United Arab Emirates as his sources of information behind his claim.

“Based on these two information sources, Muslims and leading Arab politicians in both cases, I believe that the invasion is organised by the Muslim Brotherhood using, naturally, the financial means of a number of states, he added.

Mr Zeman’s talk of an organised invasion rather than a chaotic outflow of people from the war-torn Middle East will re-enforce his reputation as a steadfast opponent to migration at odds with the Czech government, which has said it is willing to take a quota of migrants under an EU distribution plan.

Late last year Mr Zeman added fuel to a fiery row between himself and Boguslav Sobotka, the Czech prime minister, when he suggested the prime minister was putting Czech security at risk by failing to recognise the migration crisis as an “organised invasion”.

The president’s accusations come just days after the prime minister claimed Mr Zeman had “legitimised the spread of xenophobia and hatred” by appearing at a rally with members of a radical anti-immigration movement, whose leader has suggested Muslims should be ground into bone meal.