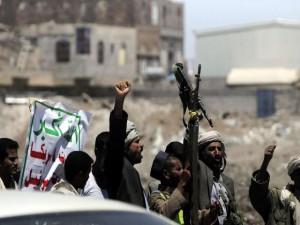 A leading member of the pro-Muslim Brotherhood Islah Party has been killed in confrontations with Shiite Houthi militants in the southwestern province of Taizz, a medical source said Saturday.

Five other anti-Houthi militants were wounded during the same battle, the source told Anadolu Agency.

Anadolu Agency could not immediately obtain comments from the Houthis on this.

Since late March, Saudi Arabia and several of its Arab allies have been pounding Houthi positions across Yemen.

Riyadh says its anti-Houthi campaign is in response to appeals by Yemen’s embattled president, Abd Rabbuh Mansour Hadi, for military intervention against the Houthis.

Last September, the Shiite group overran capital Sanaa before advancing southward on other parts of the country.