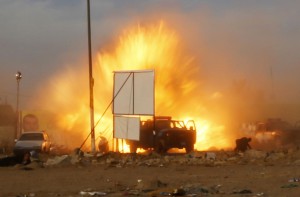 Iraqi officials say a series of suicide attacks by the Islamic State group outside a town in Anbar province west of Baghdad killed 12 soldiers and allied Sunni militiamen.

The military and hospital officials say Tuesday’s attack began when IS militants shelled army and militia positions outside the town of Haditha with mortars. They followed up with two suicide bombers who blew themselves up near the troops and later with three suicide car bombings.

The officials say airstrikes by the U.S.-led alliance destroyed six IS vehicles and killed 13 militants as they approached the site.

The officials spoke on condition of anonymity because they were not authorized to speak to the media.

Much of Anbar is under IS control.