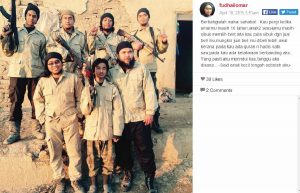 A fighter with the Islamic State in Iraq and Syria (ISIS) group who was earmarked to be its next Malaysian chief in Syria has been killed in an airstrike, like reported the New Straits Times (NST) daily, citing intelligence sources.

Muhammad Fudhail Omar, 25, died last month in an airstrike by the Syrian military in besieged Raqqa, which served as the terror group’s de facto capital.

Known as Abu Qutaibah among his comrades, Fudhail was poised to step into the shoes of Muhammad Wanndy Mohamed Jedi, the former leader and recruiter of Malaysians fighting for ISIS in Syria. Muhammad Wandy was killed in a drone attack in April, and is widely believed to be the mastermind for a hand grenade attack at a nightclub in Malaysia last year.

Three other Malaysians who could be candidates for senior posts are Muhammad Rafi Udin, Wan Mohd Aquil Wan Zainal Abidin (or Akil Zainal) and Muhammad Zahar. Malaysian authorities believe they are still in Raqqa.

According to the NST, Fudhail, who speaks Arabic, made his way to Syria in May 2014 after being persuaded to do so by the late Ustaz Mohd Lotfi Ariffin, one of the first Malaysians to go to Syria a few months earlier.

“Fudhail, with other Malaysians in the group, then joined ISIS in late 2014, where he was given the task of teaching children of ISIS members Al-Quran recitation and guarding security posts,” sources told the NST.

It is believed that a teenager from Sabah, who threatened on Facebook to kill Malaysia’s Inspector-General of Police Tan Sri Khalid Abu Bakar was influenced by Fudhail. The 17-year-old, who has been arrested by the police, was also reportedly told to carry out a lone wolf attack and slaughter foreign tourists in Sandakan last year.

A source told the NST that like Wanndy, Fudhail had used funds donated by ISIS sympathisers for his personal gain.

“Besides actively recruiting Malaysians to join ISIS in Syria, he also demanded funds from them, telling them that the money would be used to help fighters.

“He, however, used all the money ‘donated’ by sympathisers, totalling some RM20,000, for his personal use,” the source added.

To date, 34 Malaysians have been killed in Iraq and Syria since 2013, while another 53 Malaysian ISIS members remain in Syria.