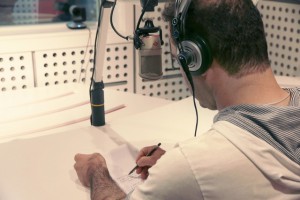 At the top of the hour, Murad bends over his printed script and begins to speak into the microphone.

The news bulletins he reads out in a state-of-the-art studio are broadcast into the city of Mosul by powerful radio transmitters set up near the city, a valuable source of information to residents almost completely cut off from the outside world. The 37-year-old is a veteran radio presenter, but never has his job mattered so much.

“Speaking to the people of Mosul over the radio is like providing them with oxygen for their daily lives, and helping them believe that there is hope and there is a future,” says Murad. Appropriately, the station he works for is called Al Ghad FM, “ghad” being Arabic for “future”, or “hope”.

Al Ghad FM has been on air for more than a year, defying the ISIL militants that took control of Iraq’s second largest city in 2014. From humble beginnings, the station has evolved into an impressive outfit with a total of 16 shows, all tailored to its Mosul audience.

Under ISIL’s tyrannical regime, the internet has been almost completely cut off and mobile phone reception is sketchy at best. Radio, an older form of mass communication, proved more difficult to disrupt.

“Radio is the perfect tool in these circumstances,” says Mohammed Al Mawsily, the man behind Al Ghad.

The 28-year-old founder and director of the station declines to give his real name for security reasons, instead opting for an alias that reflects his origin. ‘Al Mawsily’ means ‘from Mosul’ in Arabic. The National cannot disclose even the Iraqi Kurdish city in which his studios are located.

A computer engineering graduate at Mosul University who spent some time as a teaching assistant at the University of Denver, Mr Al Mawsily speaks English fluently and eloquently. He had been in Mosul for just four months after returning from the US when ISIL stormed into his home city, forcing him to flee to the autonomous Kurdish region of Iraq.

Distraught to see Mosul fall into the hands of extremists, he thought of ways to help the people who remained inside the city. When he and a couple of friends came up with the idea of Al Ghad FM, Mr Al Mawsily jumped at the chance to make a difference.

“I felt that was something I had to do to contribute,” he says.

While he had no experience in radio, he had already set up a media production company which he still runs. In March 2015, nine months after Mosul fell to ISIL, the station went on air, helped by donations from NGOs and exiled Mosul politicians.

ISIL jammed it almost immediately. As the station at first relied on only one transmitter, the insurgents were able to find the frequency and drown it out. Al Ghad FM had to switch frequencies every few days to avoid being jammed. The game of cat and mouse continued for several months until Mr Al Mawsily was able to buy stronger transmitters that ISIL was not able to interrupt.

The militants have good reason to try to block out Al Ghad FM. In everything it does, the station chips away at the authority of the self-proclaimed caliphate.

Aided by a network of sources in the city, its news programmes give an honest account of what is going on there, untainted by ISIL propaganda and censorship.

In one show, a well-known Islamic cleric questions ISIL’s legitimacy in an attempt to undermine the insurgents’ recruitment efforts in Mosul. In another, called “The Islamic State is going to vanish and disappear”, a play on ISIL’s own slogan of “The Islamic State is going to stay and expand”, listeners call in to give their views of the terrorist group, which sometimes provokes ISIL members into ringing in to hit back.

“Sometimes you get a senior member of Daesh. They will have a debate, a question and have an argument. The presenter challenges Daesh themselves,” explains Mr Al Mawsily.

Other programmes are lighthearted or practical. A cooking show gives housewives advice on how to feed the family with limited resources. ‘Hello DJ’ asks listeners to phone in to request a song and then sing along to it. Even such harmless fun is a challenge to ISIL, whose extremist interpretation of Islam forbids music.

Through the airwaves, Al Ghad FM offers distraction from ISIL’s bleak rule, and a glimpse of a lost normality. Former residents of Mosul phone in from around the world to express their support for the people in the city. Within Mosul, the station has come to be referred to as the “Sixth Bridge”, a reference to the city’s five bridges that span the Tigris, Mr Al Mawsily says proudly.

At present, the Iraqi military and the US-led international coalition fighting ISIL is preparing its assault on Mosul to clear the insurgents from its last major stronghold in Iraq. As the noose tightens around the city, resistance is fermenting within, which has led to savage reprisals

Mr Al Mawsily believes Al Ghad FM can help weaken the militants’ grip on Mosul by strengthening the solidarity of the beleaguered population.

“One of the things we focused on a lot was the “Helping Each Other Campaign”, ” he says. “If those in need find support in the community, they don’t have to go to Daesh and they will not be recruited.”

During the battle for Mosul, the station will do what it can to help avoid civilian casualties. While it is impossible to know how many tune in to Al Ghad FM, it is likely the station can help direct civilians away from the worst dangers. While the fighting is continuing, the station will cooperate with the military to try to keep collateral damage as low as possible.