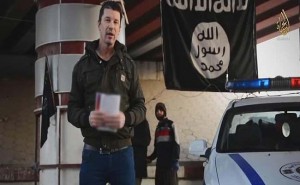 Exiles and sources inside the city explained to DW that nearby coalition air strikes have increased the group’s paranoia, but not weakened their grip. Kurdish fighters are facing off against “Islamic State” extremists along a frontline not far from the city, but a mooted attack by Iraqi forces does not look imminent, after the fall of Ramadi, the capital of Anbar province to IS in May.

A man in his 40s who recently left the city described life there to DW on the condition of anonymity, as part of his family still remain under militant control. “I saw IS throw people from buildings as punishment,” he said, adding that the group also carried out beheadings and amputated the hands of those that broke their rules, “but I couldn’t watch those terrible things.”

One way IS wields power is by spreading fear through grotesque execution videos, designed to terrify and stamp down on any opposition. “Socially, there is no counter narrative inside the city,” Rasha Al Aqeedi, a writer and Iraq analyst originally from Mosul, told DW. “Anyone who publicly objects to their rule is brutally executed. While the coalition air strikes are accurate and effective, they simply aren’t enough […] IS is definitely stronger than it was a year ago in Mosul and has a choke-hold on the city. Militants are free to travel from Syria and Turkey and into Mosul which most likely means an abundance of arms and money.”

Since they swept to power IS has banned smoking, instructed women to wear the niqab and said they must be accompanied by a male relative in public. Anyone caught breaking the Ramadan fast will be punished by lashings, said residents. IS police patrol the streets in cars and motorcycles to enforce the codes, said the man who recently fled, “but when they hear the sound of aircraft they disappear inside houses and shops. I wouldn’t let the women in my family go to the market because I was scared IS would take them.”

Sources say basic services are still being provided with around 10 hours of city power per day. Government salaries are arriving from Baghdad and the money is taxed by IS. Before the start of Ramadan this year, IS began an operation to clean the city, moving street vendors away from busy streets, said residents.

Some of the city’s residents, who are mainly Sunni Arab, welcomed the IS advance as an antidote to the harsh rule of the previous Shia-led government. But IS limits on freedoms mean they are not as popular as they would be, said a man reached by phone in the city. IS police recently stopped and scolded him because his 12 year-old sister-in-law was not covering her feet properly.

A former humanitarian worker who fled Mosul said that trade in the city is continuing. “I think IS will stay in Mosul for at least another 5 years,” he said, speaking to DW from the safety of the Kurdistan region over glasses of fruit juice on a boiling hot day. “But even if they are expelled, the new generation will bear the same thoughts that IS is teaching them,” he said pondering the future of his home town. “How do we rehabilitate the new generation from extremist thoughts?”

To isolate its citizens, IS has banned residents from leaving and phone signal is scarce. In exceptional circumstances such as for medical treatment, people can get a permit to leave but they must also provide a sponsor to vouch for their return. If they don’t come back they will be labelled a heretic, the sponsor will be arrested and their possessions will be seized. Because of this, “many preferred to stay in the city out of fear,” said Aqeedi.

On a Kurdish peshmerga base near the city of Kirkuk in northern Iraq, fighters were able to push back IS militants this spring, retaking seven villages after facing repeated attacks by the group. But the peshmerga are unlikely to retake Mosul from IS alone and their frontlines already reach the edges of majority Kurdish areas. On some fronts they are little more than 15 kilometers (9 miles) from the edge of Mosul.

“Many families are running from the IS side to the peshmerga side,” said Colonel Tariq Ahmed Ali, speaking to DW at his military base. “IS went to villages and asked them to carry weapons. That’s why they began to leave. Every night families come to us.” But those who do make the perilous journey across front lines to reach Kurdish zones are often viewed with suspicion.

The IS takeover of Mosul did not come as a complete surprise to many living there. In the months and years leading up to the fall of the city, IS in its previous incarnations demanded protection payments and targeted security forces and officials with killings and kidnappings.

Last July IS issued an ultimatum to Mosul’s Christians to pay a tax, convert or die by the sword. They all fled, abandoning the city that was home to an historic Christian community.

“I can’t think about Mosul without feeling that sting in my heart knowing too well it is gone for good,” said Aqeedi, adding “Decades and decades will be required to clean up this mess.”