You are here: Home / MidEastGulf / Mosul: Islamic State beheads own “Tigris judge” for abstaining from combat 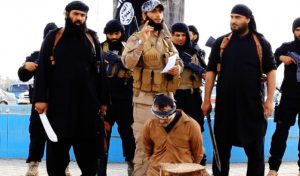 The Islamic State has killed its judge of the so-called Tigris State for refusing to partake in an attack on security forces, a local source from Nineveh has said, like reported by iraqinews.com .

Speaking on condition of anonymity to Alsumaria News on Tuesday, the source said “such groups beheaded the judge in front of the people after he refused to take part in an attack against security troops in Mosul.

This step comes within a new strategy adopted by IS to force its leaders to fight and to encourage local people to fight in the battle of Mosul, which is the biggest IS stronghold in Iraq. Reports of IS executing members for slack fighting or attempts to escape battlefields have been recurrent since the start of the security campaign in Mosul in October.

Eastern Mosul was recaptured from IS in January, after a US-backed offensive was launched in October. A new offensive started in February to retake the west. The government troops have recently pushed deeper into the Old City, a densely-populated and -structured area which military officials view as central to the desired victory over IS militants.