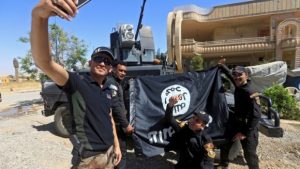 An Iraqi military commander said on Monday that fighting to recapture the city of Mosul from ISIS will end in days and that the extremists’ attempt to resist have already failed, like reported by aawsat.com.

His comments came as ISIS militants launched Monday a surprise assault on the Tanak neighborhood, west of the city. Iraqi forces however foiled the operation and seized control of another neighborhood, narrowing the dimension of the terrorists’ presence to around only 600 meters of Mosul’s overall size.

On Monday, a high-ranking commander in the Iraqi Counter-Terrorism Service (CTS) told Asharq Al-Awsat: “The battles nearing their end. There is only a small size of the old city left before we announce the final victory.”

The commander said that later that his forces were capable of liberating the Farouq neighborhood, following fierce battles with the terrorist group.

“Dozens of ISIS militants were killed in the neighborhoods of old Mosul,” he said.

Lieutenant General Abdul Ghani al-Assadi, commander of the CTS in Mosul, said: “From a military perspective, ISIS is finished. We are making calls to them to surrender or die.”

He added: “In Iraq and Syria, we have liberated an area about the size of Ireland.”

During a briefing from London, Jones explained that Iraqi forces are going block by block to clear the final terrorists from Mosul, which ISIS captured three years ago.

At the time when several observers were reporting the return of a normal life to the liberated areas of Mosul, Jones revealed that 320 out of the city’s 400 schools were reopened, allowing 350,000 students to reenroll.