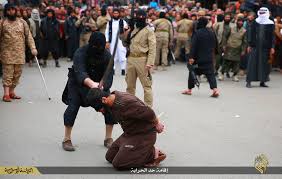 On the night of June 9, 2014, ISIS invaded the city of Mosul in Iraq. After four days of advances by the militant group on an estimated 60,000 Christians who once lived in Iraq’s second-biggest city, many in the religious minority fled to escape an unknown enemy and imminent persecution.

Abandoned homes are now locked up and marked “Property of Islamic State” in Arabic, while women who remain in Mosul are harshly controlled by ISIS militants.

Schools have been shut down and classrooms are used to spread the message of ISIS, also known as the Islamic State. Colored markers are banned and propaganda videos play on the streets. ISIS militants even preach to locals on public transportation.

The intimidation and punishment continue as ancient mosques are blown up and destroyed, and local Mosul residents speak of floggings and other forms of torture. Fuel and water are in short supply, construction has stopped, and many day laborers have lost their jobs.

This week marks the anniversary of the fall of Mosul, which remains under ISIS control. Exclusive footage captures the oppression, the fear and the lives of those who fled — and those who didn’t.