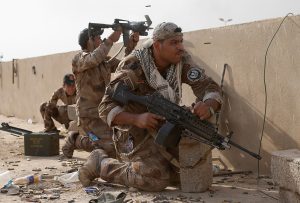 ISIS executed 12 of its foreign and non-Iraqi Arab militants on the right side of Mosul, including prominent commanders accused of espionage for the Iraqi government and coalition forces, according to a Kurdish official, like reported by aawsat.com.

Media official of Patriotic Union of Kurdistan Gaith Surji said that ISIS executed 12 of its militants accused of espionage for the Iraqi government, adding that based on the information they received, a number of military and security commanders were among the executed.

Since ISIS took over Mosul in 2014, a large number of its Iraqi, Arab, and foreign militants have deflected from the organization. In addition, ISIS militants regularly fight internally over money and positions.

Many of Iraqi ISIS militants are trying to escape with families leaving Mosul or go undercover as sleeper cells, according to civilians, adding that most of the remaining ISIS militants fighting security forces in Mosul are foreigners.

Jawdat told Asharq al-Awsat newspaper that according to intelligence, the police killed other commanders; Abo Abdallah in Rifai area and Nafei Abdallah and two of his bodyguards in Hawi area.

Federal police’s drones and artillery continue to target ISIS clusters and movements in the strategic July 17 neighborhood, west of Mosul. In addition, 17 militants were killed during the bombardment on an ISIS outpost behind al-Sahaba mosque.

Jawdat pointed out that since the initiation of the liberation operation of the right side of the city, police drones killed 859 ISIS militants, including prominent leaders, destroyed 284 booby-trapped cars and 253 booby-trapped motorcycles, and liberated over 274 kilometers so far.

As for humanitarian effort, Iraqi forces rescued 265,000 civilians in combat areas, while 30,000 were able to go back to their liberated residential areas.

Lieutenant General Jawdat concluded that the military included several new tactics on the military plans and updated their accuracy factor in targeting the enemy, in addition to using developed techniques to avoid civilian casualties.