You are here: Home / MidEastGulf / Mosul: Iraqi Forces arrest one of most dangerous female members of ISIL 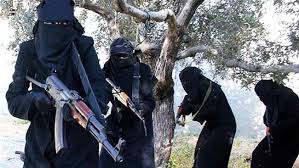 Iraqi security forces have arrested a notorious female member of ISIL in Eastern Mosul, local sources in Nineveh province disclosed on Saturday, adding she was in charge of recruiting young girls and children for the terrorist group.

The sources said that Hafsah al-Basrawiyeh (from Basra city) has been arrested by Iraqi security forces in al-Ta’azizat region in Mosul.

The sources added that Hafsah had come to Mosul in 2007 and was responsible for recruiting young girls and children to marry ISIL members.

The attacks destroyed an ISIL command center as well as several tunnels, on which the terrorist group has relied for years to mount surprise attacks.

The Iraqi Joint Operations Command also said a number of militant commanders were killed when a vehicle in which they were traveling was hit in an airstrike on the Eastern outskirts of Mosul.

Among those killed was the self-proclaimed ISIL governor of Mosul, identified as Haqqi Esmaeil Owaid also known as Abu Ahmed. Another man identified as Abu Maha, in charge of ISIL intelligence affairs, was also killed in the airstrike.

Additionally, three civilians lost their lives and four others were injured on Wednesday evening when an ISIL drone fired a rocket at the Nabi Younis market East of Mosul.