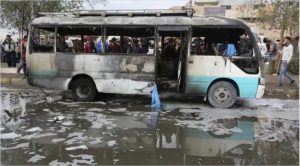 Eleven schoolboys were killed and wounded Thursday when a bomb blast targeted a school bus in Iraq’s second largest city of Mosul, a security source was quoted as saying according to iraqinews.com.

No group has so far claimed responsibility for the attack, but the Islamic State (IS) militant group, in most cases, is responsible for attacks targeting crowded areas, including markets, cafes and mosques across Iraq.

Violence in the country has surged further with the emergence of Islamic State extremist militants who proclaimed an “Islamic Caliphate” in Iraq and Syria in 2014.

The surge in violence between armed groups and government forces has resulted in over five million internally displaced persons across Iraq and left more than 11 million in need of humanitarian assistance, according to the UN Office for the Coordination of Humanitarian Affairs.

A total of 69 Iraqi civilians were killed and another 105 injured in acts of terrorism, violence and armed conflict in Iraq in October 2018, according to casualty figures recorded by the United Nations Assistance Mission for Iraq (UNAMI).