You are here: Home / MidEastGulf / Most Islamic State commanders in eastern Mosul killed 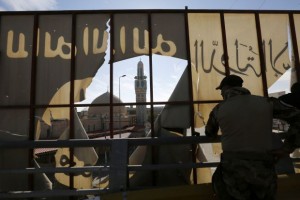 The majority of Islamic State (ISIS/ISIL) commanders in Mosul, the terrorist group’s last major stronghold in Iraq, have been killed by the U.S.-backed Iraqi government forces and their allies, an Iraqi general tells Reuters.

An alliance primarily made up of tens of thousands of Iraqi security forces, Kurdish Peshmerga troops, and Iran-allied Shiite militias has been fighting to push ISIS out of Mosul since mid-October.

Meanwhile, western Mosul remains in the hands of ISIS, but Iraqi Lt. Gen. Abdul Ghani al-Assad told Reuters the coalition should be able to recapture that side.

“God willing, there will be a meeting in the next few days attended by all the commanders concerned with liberation operations,” Gen. Assad said when asked when the offensive to seize western Mosul will begin.

“It will not be harder than what we have seen. The majority of [IS] commanders have been killed in the eastern side,” he added without elaborating.

Nevertheless, the Middle East Monitor points out, “Iraqi and US military officers have previously said that the more densely populated west bank could pose additional military challenges. This is not only because of population density, but also because the militants have a greater concentration of forces there.”

On Wednesday, some Iraqi military officials estimated that Iraq controls about 95 percent of eastern Mosul.

“Today we celebrate … the liberation of the eastern bank in Mosul,” Lt. Gen. Talib Al-Jughati told reporters in Bartella, just outside Mosul, Wednesday, according to the Middle East Monitor.

The jihadist group’s defeat in Mosul, Iraq’s second largest city, could spell the end of ISIS in the country.

“Several thousand civilians have been killed or wounded in the Mosul fighting since October,” Reuters points out.

“Earlier reports cited US military commanders as indicating that the fighting in Mosul had been so bloody, that the elite soldiers of the [Iraqi Counter-Terrorism Service] CTS had been depleted by around 50 per cent,” states the Middle East Monitor, adding, “It is therefore unlikely that the fight for western Mosul will be easier than the more than three months spent in eastern parts of the city.”