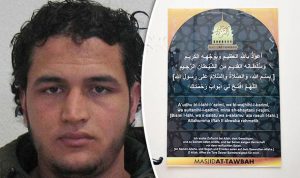 The mosque in Berlin attended by Berlin truck attacker Anis Amri has been closed. The mosque is permanently closed, read a note in German and Turkish on the door of the prayer rooms which was seen on Tuesday, like reported by eblnews.com.

This was confirmed by police, who said the signs on the mosque had been taken down. The local broadcaster RBB reported that the building’s owners and the mosque association had agreed to cancelling the rental agreement. Furniture and prayer rugs had already been removed.

Police say they had information that the place of worship in the  apartment house had been a meeting point for violence-prone Islamists. From a building across the street, the police had kept the mosque under surveillance with a hidden camera.

Amri, who killed 12 people and injured more than 50 others when he drove his truck into a crowded Christmas market on December 19, was often filmed visiting the mosque, including on the same day as his attack.

Berlin authorities have been debating a possible ban of the mosque association “Fussilet 33” since 2015.

Berlin police spokesman Winfried Wenzel said officials were taking note of the association’s decision of no longer using the building.

“Of more importance to the Berlin police is the question where potential perpetrators may turn to next,” he said.

It would make sense to continue efforts seeking a ban of the association, Wenzel added. This would prevent its officials from setting up a new mosque under the same or a similar name.