You are here: Home / West Asia / Moscow to supply arms, ammunition to Kabul 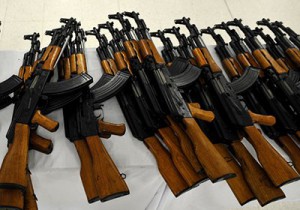 Russia will deliver to Afghanistan in January a batch of small arms for police officers, Russian president’s special envoy for Afghanistan, Director of the 2nd Asia Department of the Russian Foreign Ministry Zamir Kabulov said.

According to him, arms supplies from Russia are a significant factor contributing to normalizing the situation in Afghanistan.

“At present, Russian agencies consider a number of corresponding requests from the Afghan side,” the presidential envoy told Russian media on Tuesday.

“In particular, the issue of the supply of 10,000 AK-47 (assault rifles) with rounds to them through the Russian Interior Ministry has been practically decided. The batch is expected to be supplied in January 2016,” the official said.

“Negotiations are currently underway on the commercial supplies of Russian helicopter equipment to Afghanistan,” he added.

“Russia has been consistently pursuing the policy of providing comprehensive assistance to Afghanistan in the establishment of a peaceful, independent, stable and self-sufficient state, free from terrorism and drugs,” Kabulov said.

“We support the national reconciliation line of the government of the Islamic Republic of Afghanistan. We are ready to flexibly approach the issues related to the possible weakening of the sanctions regime according to the UN Security Council’s Resolution 1988 against the Taliban, if it is not contrary to the national interests of Afghanistan.”

Last week, Kabulov said that Moscow was dramatically changing its position on the Taliban in Afghanistan. From now on, they are not an enemy for Russia any more. Moreover, they even become Moscow’s partners in a sense. “The interests of the Taliban in the fight against Daesh in Afghanistan are in line with Russian objectives,” the Russian presidential special envoy said.