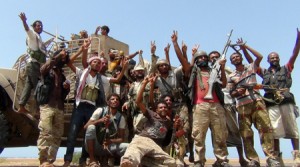 Russian Ambassador to Yemen congratulated Yemeni Undersecretary of the Ministry of Foreign Affairs for Political Affairs on victories achieved by the national army in al-Mokha strategic city, like reported by .aawsat.com.

This came during the meeting between Vladimir Dedushkin and Mansour Baggash in Riyadh on Tuesday.

Saba News Agency quoted Baggash as telling the Russian ambassador: “The military decision was imposed on the government after Houthi militias occupied the government’s institutions, confiscated the army’s weapons to use it in killing Yemenis, besieged cities, starved citizens, stole the country’s antiquities, depleted the strategic reserves of the Central Bank and rejected peace options.”

Baggash confirmed that by controlling al-Mokha strategic port, the armed forces will work on stopping the arm smuggling by Houthis and Saleh militias from Iran, which has been causing the war to be prolonged and increasing bloodshed.

The Yemeni Undersecretary also briefed Dedushkin on the procedures taken and efforts put by the Yemeni legitimate government to provide services for the citizens and restore normality in Aden and other liberated cities and provinces.

He expressed Yemen’s aspirations for Russia to put more effort within the group of 18 countries seeking to reach a political settlement in Yemen to force the two rebelled parties in Yemen to comply with the U.N. resolutions on Yemen and stop their violations against Yemenis all over the country.

“Dedushkin congratulated Yemenis on achieving victory in al-Mokha and stressed the importance of continuation of coordination and communication between the two countries on political, developmental and anti-terror cases,” according to official Yemeni sources.

The Russian ambassador also said he hopes Yemenis could reach a peaceful and fair solution to end the war.