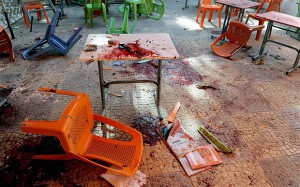 A mortar shell slammed into a school in an upscale neighborhood in the capital Damascus Wednesday, injuring 23 students and killing one female teacher, the official Syrian TV reported.

The mortar round exploded at a school in the upscale neighborhood of Malki, said the report.

The attack comes as part of ongoing mortarshelling from rebel-held areas at the outskirts of the capital against residential neighborhoods in different parts of Damascus.

Meanwhile, the official SANA news agency said the Syrian army backed by the Shiite Lebanese Hezbollah group continued to advance against the rebel positions in the rugged Qalamoun region north of Damascus and along the borderline with Lebanon, capturing new hilltops as part of the ongoing military showdown there.