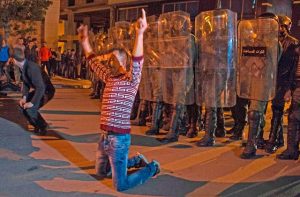 In the town of Al Hoceima, Morocco, the Eid holiday at the end of Ramadan was a time of clashes rather than celebration, like reported by nytimes.com. The police and authorities blockaded roads leading to the town and prevented protesters from gathering in its main square. Crowds managed to assemble anyway, on side streets, before being violently dispersed by riot police. Young men threw stones; the police fired tear gas.

Al Hoceima, at the foothills of the Rif, a northern mountain region with a long history of rebellion, has been the center of a protest movement for eight months. The uprising has landed hundreds in jail, led tens of thousands to demonstrate across the country and unsettled this quiet North African kingdom. It has also exposed divides: between developed coastal cities and a neglected, resentful interior; between young people eager to challenge authority and an older generation fearful of change; and between an all-powerful monarchy and a street movement with no traditional leaders.

It all started in October in Al Hoceima, a city of 56,000 people on the Mediterranean coast. A fishmonger named Mouhcine Fikri was caught with a shipment of banned swordfish. When the police and port officials tossed the fish into a garbage truck, the distraught Mr. Fikri jumped in and was crushed to death by the truck’s compactor.

The image of a young Moroccan trying to make a living disposed of by the authorities like a piece of garbage quickly spread on the internet and inflamed the country. It was the perfect example of something familiar to most Moroccans: arbitrary and humiliating treatment by the state.

Protests broke out around the country. In Al Hoceima, a movement known as Hirak sprang up. Its members demanded justice for Mr. Fikri. (Several officials were eventually convicted of manslaughter and falsifying public documents, and given short prison sentences.) They also called for an end to corruption and greater investment in their marginalized region: the construction of a university, a cancer hospital, better roads.

Night after night, they rallied peacefully in Al Hoceima’s main square, often listening to impassioned tirades against the political establishment by a charismatic, unemployed high school dropout named Nasser Zafzafi. Some waved Berber or Amazigh flags: a majority of the population here speaks the local Berber dialect as a first language.

But in late May, Mr. Zafzafi was arrested and accused of threatening national security. As many as 100 other Hirak leaders and members have also been detained, and a huge police presence has been deployed to shut down unrest in the region.

These are the most significant protests Morocco has witnessed since 2011, when the Arab Spring swept the country. Then, King Mohammed VI was quick to respond, promising a more democratic Constitution and raising the salaries of public officials, measures that helped placate Moroccans. Given the strife and chaos that has descended on so many Arab countries, there has been relief here at the kingdom’s stability.

Yet the promised reforms have proved underwhelming. The monarchy remains as powerful as ever; the king’s advisers have much more influence than elected officials. Moroccans complain of corruption, unemployment and failing schools. They respect the king but often inveigh against the “makhzen,” the network of power and patronage surrounding the monarchy.

The stalled reforms have left people in the Rif, who have long felt alienated from the central authorities, complaining that they still aren’t represented. “Are you a government or a gang?” read some of the banners at Al Hoceima’s protests.

One could also say that it all started at least a century ago. In the 1920s, Abdelkrim el-Khattabi led the tribes of the Rif in an insurrection against Spain, establishing an independent territory. After the Spanish and the French — Morocco’s two colonizers — launched a brutal attack on the region, bombing, gassing and burning villages to the ground, Khattabi was defeated and ended his days in exile in Cairo.

In the late 1950s, after Morocco’s independence, the region rose up again. Then Prince Hassan II, future king and father of Mohammed VI, led a bloody military crackdown. He held a lifelong grudge against the region, calling its inhabitants “savages” in a televised speech and withholding public investment in services and infrastructure for four decades.

Mohammed VI reversed that policy. He initiated huge infrastructure projects — a container port in Tangier, a high-speed train — in the north of the country. Many other projects and investments have been promised or are underway. But so far the benefits have largely failed to reach the locals, even as they have raised their expectations.

Rif protesters refused to meet with local party officials and ministerial delegations, insisting that they would negotiate only with emissaries of the king. This is the unfortunate but unsurprising result of the political vacuum created by the monarch’s tight control. Despite promising democratization and devolution of power to regional authorities, the monarchy has continued to concentrate most power in its hand. The king is the country’s highest religious authority, its pre-eminent political actor and its largest fortune. Everyone defers to him and knows that the only decisions that truly count are his.

The makhzen has not tolerated the emergence of truly independent political forces. After the 2016 parliamentary elections, the palace and its allies maneuvered to dilute the influence of the Justice and Development Party, the Islamist party that had won the highest share of votes — forcing it to abandon its popular prime minister and to form a government with parties of the palace’s choosing. By co-opting and undermining political parties, muzzling the media and harassing civil society, the Moroccan regime has left itself with few credible intermediaries at moments of social unrest.

While the Rif has its own particular history, the demands of protesters there resonate in provincial towns and rural areas across the country. The upheaval could have been an opportunity to discuss the country’s unequal development and the lack of accountability for local officials. Instead, the “loyal” media has engaged in smear campaigns, accusing the protesters of being paid foreign agents and separatists intent on starting a civil war. This has divided the country, with many Moroccans rallying around flag and king against the troublemakers of the northern mountains.

More than 100 leaders and members of the Hirak have been arrested in recent weeks. Liberal observers here are anxious about the crackdown, fearing a step back to the country’s repressive past.

Solidarity protests have taken place across the country. The largest filled the palm-tree-lined central avenue of Rabat on June 11, with thousands of people. It was organized in part by the banned Islamist group Justice and Spirituality, which does not recognize the king as the country’s highest religious authority. It’s unclear whether the Hirak leaders would have welcomed Islamists joining their movement; they can’t make their voices heard from prison.

The protest movement’s main demand now is the release of Hirak’s members. There are calls for a general strike and accusations that protesters are being framed and mistreated in detention. Twenty-five Hirak activists have been sentenced to 18-month terms.

The sense that there is a double standard at work, that the people of the Rif are second-class citizens and that their region is being left out of the country’s development, is at the heart of the protests. It is a testament to Morocco’s relative openness, to the expectations of change it has nurtured, that protesters felt empowered to criticize the authorities. Shutting down dissent in the Rif will hardly soothe its grievances. Nor is it sure to prevent similar, common demands — for jobs, for justice, for better governance — from emerging elsewhere in the country.