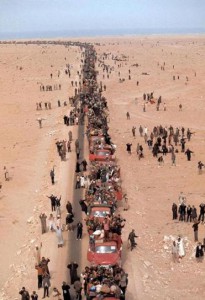 In October 2014 the Moroccan Ministry of the Interior launched an enhanced effort to combat threats of terrorism through a strategy called Operation Hadar. The Hadar security forces consist of the Royal Armed Forces, the Royal Gendarmerie, the national police, and auxiliary forces.[1] This counterterrorism strategy, meant to prevent Moroccan extremists trained abroad from re-entering the state, focuses on patrolling key sites and cities in order to protect civilians and foreign visitors.[2] In practice, it has affected the lives of citizens who now must cope with the heightened presence of armed security forces, and has further compromised the safety of the population of Western Sahara.

The threat of the Islamic State and its splinter cells in North Africa has prompted the Ministry of the Interior’s acceleration of national security measures. Moroccan authorities claim that over 1,000 Moroccan nationals have joined ISIS forces abroad, in addition to 2,000 bi-nationals.[3] The looming threat of extremists trained in Libya and Syria returning to Morocco has led to a militarization of national security. The first phase of Operation Hadar deployed security forces to six major cities: Casablanca, Rabat, Marrakech, Fes, Tangier, and Agadir. The second phase will send security forces and military units to other regions of the state. The forces are tasked with tightening controls at airports, train stations, and other transportation sites to monitor suspicious activities, as well as with patrolling borders.

Upon its implementation, there were reports of soldiers and Hadar security forces in neighborhoods and residential areas throughout Casablanca visibly armed with automatic weapons, causing many residents to have mixed feelings about the new security strategy.[4] Some felt comforted by the visibility of the security forces, believing that they serve as an effective deterrent for terrorist plots. Others expressed concern about the possibility of the strategy creating a police state, in which surveillance would take precedence over protecting vulnerable communities.[5]

Although the strategy may be of some help in Morocco proper, demonstrated by several recent reports on Moroccan forces dismantling terrorist cells from Tangier to Casablanca,[6] it comes with negative implications for the personal security of many living within Western Sahara, the territories that the Moroccan state refers to as the “southern provinces.”

Western Sahara is home to a fervent and long-standing independence movement that has resisted Moroccan rule since 1975. Protesters and activists have confronted repression, arrest, and imprisonment. Over the years, Sahrawis regardless of political disposition have been targeted by surveillance and police patrols. The Ministry of the Interior and the Moroccan monarchy have long viewed national security in the territories as combating individuals or groups that are in opposition to the state. Consequently, anyone who challenges, criticizes, or is believed to oppose the territorial integrity of the Moroccan state and its claim to Western Sahara is considered a threat to national stability and a national security risk. These individuals are deemed disruptive to the public order and often arrested. Moroccan law also allows for the arrest of journalists and the censorship of websites that “disrupt public order by intimidation, terror, or violence.”[7] This too has compromised the personal security and livelihood of Sahrawis.

While Sahrawis have lived under militarized security for decades, Operation Hadar further compromises their security, as it gives security forces even more incentive to crack down on dissent. In 2015 alone there has been a spike in police aggression against Sahrawis living in Western Sahara.[8] Aminatou Haidar, a prominent Sahrawi human rights activist, was meeting with representatives from the Office of the High Commissioner for Human Rights in her home when it came under attack for nearly two hours after a pro-independence demonstration nearby. Moroccan security forces threw stones through her windows, wounded a colleague of hers, and destroyed a UN vehicle.[9] In a separate incident, 21-year-old Mohamed Lamine Haidala was stabbed in the neck by five Moroccan men after they reportedly verbally harassed his aunt.[10] Although the young man was not involved in any protest or resistance activities in the past, he was arrested and experienced medical neglect at multiple hospitals located in Western Sahara territories and the Moroccan city of Agadir; meanwhile his attackers were not arrested or charged. Haidala died days later from infection and internal hemorrhaging.

Hence the militarization of national security, with the stated intention of increasing domestic safety, has simultaneously increased the insecurity of Sahrawis in Western Sahara. Impunity is compounded by the inability of the UN Mission in Western Sahara (MINURSO) to monitor human rights, personal security, and conduct site visits. Morocco has repeatedly been criticized for preventing human rights monitors and the UN Special Envoy, Christopher Ross, from entering the Western Sahara territories.[11]

As a close ally of the United States in counterterrorism and intelligence gathering, Morocco is considered a crucial partner in North Africa for deterring the spread and influence of the Islamic State. Morocco’s enhanced security measures, in the form of Operation Hadar and its multifaceted counterterrorism strategies, have been commended by the United States as the two countries continue to work closely together. In June 2015, the U.S. State Department’s Bureau of Counterterrorism emphasized Morocco’s part in stemming “the flow of foreign terrorist fighters and [countering] ISIL propaganda.”[12] This priority has overshadowed the insecurities that the operation creates for Sahrawis.[13]

While Morocco and the United States focus on combating the spread of the Islamic State deeper into North Africa, the effects of militarized security strategies on civilian populations is overlooked. Operation Hadar will likely continue to negatively affect the lives of Sahrawis in Western Sahara for the sake of countering violent extremism.

[8] Interviews conducted by the author with 14 Sahrawi residents from Laayoune, Western Sahara, in June 2015.