You are here: Home / Mediterranean / Morocco to take part in ground operations in Yemen against Houti 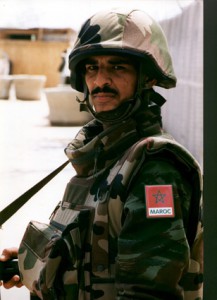 Morocco is poised to participate in a ground operation to restore legitimacy in Yemen and fight the Iran-backed Houti rebels.

Troops from nine Arab countries, including Morocco, are expected to take part in a ground operation of Yemen, according to news website Alyaoum24, citing Yemeni media sources.

The military campaign aims at fighting and weakening the Iran-backed Houthi rebels and the troops loyal to former Yemeni President Ali Abdullah Saleh.

According to the same source, troops from Morocco, Egypt, Jordan, Sudan and Kuwait will be heading to the province of Marib in the coming hours. These troops will be fighting alongside forces loyal to the government, aided by airstrikes led by Saudi Arabia.

The same source added that in addition to Saudi Arabia, United Arab Emirates and Bahrain, Qatar also deployed troops to Yemen for the first time since the beginning of the Saudi-led military operation, codenamed Decisive Storm, in Yemen.

According to Doha-based Al-Jazeera, one-thousand group troops, supported by armored vehicles and helicopters, are headed for the province of Marib.

This comes after a missile strike killed 60 soldiers, including 45 from the UAE, 10 Saudi and five Bahraini soldiers, at a base in the province of Marib.