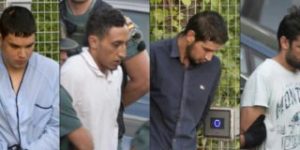 Moroccan and Spanish authorities dismantled five members of a terrorist cell suspected of recruiting fighters to the Islamic State (IS) group, the Moroccan Interior Ministry announced.

In a joint operation, three suspects were arrested in the city of Fnideq in northern Morocco, while their two partners in the Spanish city of Bilbao, the ministry said in a statement.

One of the suspects arrested in Spain holds the Moroccan nationality, whereas the other is Senegalese, it added.

The initial investigations revealed that the suspects had contact with IS members in the Syrian-Iraqi territories and were recruiting young people to conduct terror attacks under the supervision of IS, the same source said.

The raids conducted by the Moroccan authorities resulted also in the seizure of knives, military uniforms and electronic equipments.

Morocco and Spain enjoy strong anti-terror cooperation. Security services in the two countries have conducted several joint operations since the rise of IS.