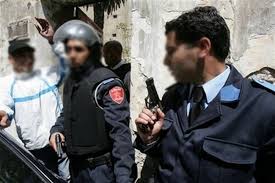 Morocco’s Central Bureau of Judicial Investigation has arrested eight men with alleged ties to ISIS active in the cities of Fez and Tangiers, the interior ministry said on Friday.

A rifle, ammunition “and documents inciting towards jihad” were seized during the operation on Thursday, the ministry said in a statement, a copy of which was received by Asharq Al-Awsat newspaper.

It said two of the cell’s members had been previously arrested on terror charges. They were active in a terrorist cell – led by a French citizen – plotting attacks inside and outside the kingdom.

An initial investigation pointed towards the eight men having ties with ISIS in Syria and Iraq, “recruiting and sending Moroccan volunteers” there.

They will be referred to the judiciary once their questioning by the Central Bureau of Judicial Investigation is over.

Police arrested 143 suspects for being part of cells linked to ISIS.

Since 2002, Moroccan security forces have arrested more than 159 terrorist cells, including 38 networks in 2013 alone.

Those cells have been closely linked with terrorist groups in Syria and Iraq.

There are more than 1,579 Moroccan fighters in Syria and Iraq – 758 of them have joined ISIS while the rest are fighting alongside other extremist groups.