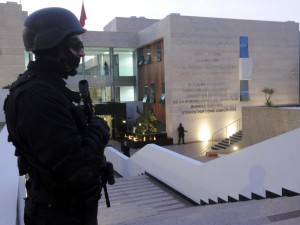 An Isis cell dismantled in Morocco was planning an attack involving chemical weapons, authorities in the country say.

Ten suspects were arrested in a raid on a safe house on Thursday. They had been planning a suicide attack for the following day, Morocco’s Central Bureau of Judicial Investigations (BCIJ) Director Abdelhak Khiame told a press conference.

Six jars of sulphur-containing chemical fertilizer, which when heated can release a fatally toxic gas, were found during the raid.

The chemicals may have been put in the bombs in order to be disseminated on detonation.

Four machine guns, thirteen tear gas bombs and significant quantities of ammunition were also among the weapons seized, together with an Isis flag.

“They wanted to sow psychosis among the population”, he said, adding there may have been, at the lowest estimate, “dozens” of victims.

The raid “reveals a radical change in Daesh tactics”, he told the press conference.

“The weapons seized are from Libya, which confirms that…the terrorist organization positions itself increasingly in the Maghreb”.

Significantly, the alleged terrorists were not trained at camps in Iraq and Syria, but “were trained on site in coordination with Daesh, which provided them with the necessary arms”.

It is thought the youngest of the suspects, a 16-year-old boy, had received training for detonating a car suicide bomb.

The alleged leader of the cell is a 35-year-old estate agent from Layounne in north-west Morocco. The ten suspects include a French national and a graduate.