You are here: Home / Mediterranean / Morocco had key intelligence role after Paris attacks 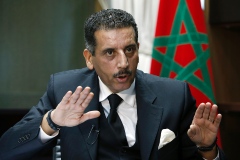 A top Moroccan intelligence official said on Tuesday that it was his country that put French and Belgian police on the trail of the network behind the November attacks in Paris that killed 130, and likely spared more lives by pinpointing the location of the suspected ringleader.

The director of the Central Bureau of Judicial Investigations, Abdelhak Khiame, said “this intelligence precisely allowed France to avoid more severe attacks that were planned.”

European investigators are trying to piece together the geography of the Nov. 13 attacks, focusing attention not only on Paris and Brussels — where some of the attackers lived — but on other parts of Europe as well as the trail of some to Syria. The Islamic State extremist group claimed responsibility for the attacks on restaurants, cafes, a noted music hall and the sports stadium.

France’s interior minister had said that a non-European country led the French to suspected ringleader Abdelhamid Abaaoud, who was killed five days after the carnage in a raid in the Paris suburb of Saint-Denis.

Abaaoud was among the attackers who lived in Molenbeek, a Brussels neighborhood that is home to numerous Belgians of Moroccan descent. Khiame claimed that Moroccan intelligence quickly pointed police to Molenbeek.

“After the attacks that took place in Paris, Morocco communicated that they (the attackers) were connected to a Belgian affiliate in Molenbeek,” Khiame said. “It was true because afterwards, thanks to the intelligence that we had, we were able to communicate to France that the mastermind of this group … Abdelhamid Abaaoud, was still in Paris at Saint-Denis.”

The official confirmed reports that Abaaoud’s brother, Yassine, was arrested Oct. 10 in Morocco while on a family visit as a preventive measure, because he “belongs to a family (involved) in terrorism.”

Abdelhamid Abaaoud was sentenced in absentia last year — before the Paris attacks — to 20 years’ imprisonment for serving as an IS recruiter and kidnapping his brother Younes, then 13, to join him in IS-controlled territory. Khiame described Younes as having a leadership role today.