Morocco’s Central Bureau of Judicial Investigation (BCIJ) has dismantled a terrorist cell linked to the so-called Islamic States (IS), Morocco’s Ministry of Interior said in a communiqué on Friday, according to moroccoworldnews.com 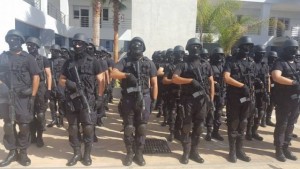 The communiqué said that the BCIJ has thwarted a “dangerous terrorist attack was planned to be carried out by the cell, which includes seven persons live in six different cities across Morocco, including Salé, EL Jadida, and in both of the provinces, Boulaouane and El Jadida.

“This security operation was conducted to monitor the location of the mastermind of this terrorist cell in El Jadida. The cell was planning to carry out a terrorist attack in Morocco at the behest of the commanders of IS in Syria, Iraq and Libya,” the communiqué said.

According to the same source, BCIJ has confiscated firearms, including a submachine gun provided by infrared lenses, seven pistols, massive munitions, four large-sized knives, and two wireless devices, in addition to military panties, stick handlers and suspicious chemical materials used in the manufacture of explosives.

The Interior Ministry further added that this cell planned to recruit more youth and mobilize them to carry out terrorist attacks to kill citizens and destabilize the country.

“This dismantlement came following the IS’ frequency terrorist attacks that recently targeted several countries and the threats that have been made by Moroccan militants who fight in the ranks of IS via media, expressing their determination to carry out similar terrorist attacks in the kingdom,” the ministry said.

The suspects will appear in court as soon as the investigation of the public prosecutor ends.