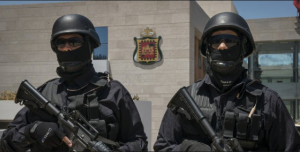 Morocco’s Central Bureau of Judicial Investigations (BCIJ) dismantled a three-member terror cell on Monday. The terrorists were active in the cities of Inezgane and Ait Melloul, near Agadir in southern Morocco, like reported by moroccoworldnews.com.

The members, aged between 26 and 28, have alleged links with ISIS, the BCIJ said in a statement.

According to preliminary investigations, the leader of the cell and his accomplices pledged allegiance to the self-proclaimed caliph of ISIS before planning to execute terror operations that seek to undermine Morocco’s security and stability.

The members of the terror cell also sought to obtain firearms and materials used in the manufacture of explosive devices.

The suspects were also advocating the terrorist operations of ISIS in several foreign countries.

The operation is part of Morocco’s approach against terrorism amid the increase of terror theats as well as the “persistence of individuals steeped in extremist ideology to serve the destructive agendas of various terrorist organizations.”

BCIJ said that the suspects are now in custody for further investigation.

The operation followed a similar raid last month, when the BCIJ dismantled a four-member terror cell in Tangier on October 5.

On September 10, the head of the BCIJ Abdelhak El Khiame said Morocco is among the countries targeted by ISIS extremism and violent ideology.

Following an operation to dismantle an ISIS cell in September, BCIJ said Morocco avoided a “bloodbath.”

He said that the members of the cell dismantled on September 1 planned to attack sensitive areas in the North African country.

One of the suspects attempted to blow himself up with a gas cylinder during the arrest.

The leader of the terror cell also murdered an employee at the Tiflet prison on October 27.