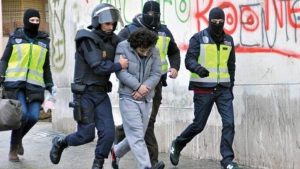 Moroccan authorities dismantled a terrorist cell in the northeastern city of Sidi Slimane, the Interior Ministry said in a statement.

Initial investigations have revealed that the leader of this terrorist cell, who was arrested in 2014 for terror charges following the dismantling of another terrorist cell that used to recruit militants and send them to Syria and Iraq, had recruited the members of his cell who share the same extremist thoughts.

The suspects planned to carry out terrorist projects aimed at undermining the security of citizens and destabilizing the public order.

The latest operation is part of ongoing efforts by Moroccan security services to address all threats likely to undermine the country’s security and stability.

During the Arab Interior Ministers 37th Session in Tunis, Noureddine Boutayeb, Minister Delegate to the Minister of the Interior, said that the authorities have laid a security strategy to ensure the safety of citizens and maintain stability in the country.

He added that Morocco has always been keen to reinforce regional and international cooperation through signing several multilateral and bilateral agreements in fields of security and fighting terrorism.

In this context, Boutayeb highlighted the role of the Global Counterterrorism Forum in understanding this global calamity and putting effective policies and tangible measures.