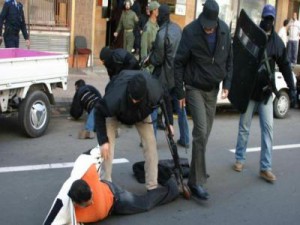 The Central Bureau of Judicial Investigation (BCIJ), an offshoot of Morocco’s domestic intelligence agency (DGST), dismantled on Tuesday a ten-member terrorist network involved in the recruitment of Moroccan fighters for the organization of the Islamic State in Iraq and Syria (ISIS), the Interior Ministry said in a statement.

Investigations led by the BCIJ showed that the busted network was operating in Casablanca and Boujniba and was plotting to create dormant cells to perpetrate terrorist schemes in the Kingdom with the aim of establishing a “Caliphate” along the lines of the IS subversive agenda, the Ministry said.

The probe also revealed that the members of the cell had extensive knowledge of explosive making and were plotting with Moroccan IS fighters to perpetrate terrorist attacks against key facilities in the Kingdom with financial and logistical support from the leaders of the IS terrorist organization, the statement added.

The arrested members will stand before justice following the completion of investigation under the supervision of the General Prosecutor, the same source said.