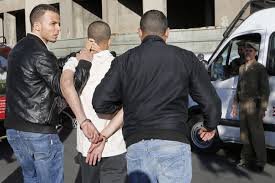 Moroccan police announced the dismantling of an Islamic State (IS) linked cell that planned a series of attacks on Moroccan soil.

Speaking in a press conference Monday, Abdelhak El Khayam, director of the central bureau of judiciary investigations, revealed that the 5-member terrorist cell was plotting to carry out terrorist operations in Morocco upon instructions of IS.

The police officer said that they seized a sizable quantity of weapons, including automatic guns, tear gas bombs, bladed weapons and an important quantity of ammunitions and suspicious products, noting that investigations revealed that these weapons were brought to the country via its eastern borders with Algeria.

The cell members were expecting the visit of a member of IS from Syria to train them on how to make explosives and use weapons, he added.

Al Khayam commented that the ring has changed its tactics after IS used to send new recruits to Iraq and Syria to train them before sending them back to their home country to carry out terrorist attacks.

Morocco has busted numerous IS-linked groups this year, and arrested dozens of suspects.