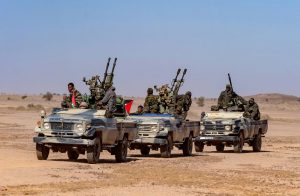 The head of Morocco’s Central Bureau of Judicial Investigation(BCIJ), Cherkaoui Haboub, recalled the involvement of Polisario members in terror groups, including Al Qaeda, and warned against the terrorism threat the Sahel region faces, like reported by moroccoworldnews.com.

In an interview with Jeune Afrique this week, the BCIJ chief emphasized that more than 100 Polisario members are active within Al Qaeda in the Islamic Maghreb (AQIM).

The BCIJ official renewed Morocco’s concerns regarding terrorist groups in the Sahel, citing Polisario’s contribution to the security threat in the region.

He said that indoctrination by imams in the Tindouf camps imposes a threat to the region, describing it as a direct factor that made the Sahel “what it is today.”

Morocco is among the countries that consider the Sahel a breeding ground for terror groups, calling for a shared responsibility to address the security challenges in the region.

The top official said that the Sahel is a threat both for Morocco and for other countries, recalling Polisario’s involvement in small terror groups within Al Qaeda in the Islamic Maghreb and ISIS.

The remarks are not the first of their kind from Morocco. Several top security officials have warned against the lack of security cooperation in the region, including former BCIJ chief Abdelhak El Khiame.

Read Also: Terror Network Led by Polisario Member Targets Military Sites in Sahel
In different interviews, in 2018, the former BCIJ official called on Algeria to engage in a security mechanism to help reduce the scourge of terrorism in the Sahel.

He also condemned Algeria’s “ignorance” since Morocco has warned Algeria of the situation in the Sahel, where several terrorism organizations are active, including ISIS and Al Qaeda.

Repeating the same concerns, the current head of the BCIJ said the Sahel represents a “great danger” and a “great security challenge” for Morocco. He argued that the threat “weighs down on the kingdom and other neighboring countries.”

He said Al Qaeda and Daesh have found “fertile ground” in the Sahel, adding that numerous terror groups are active in the region.

Walid’s network destroyed several sites in the Sahel and has caused many deaths and injuries.

In 2019, the US State Department put a $5 million bounty on the head of the Polisario member, citing his involvement in the death of four American soldiers.

Walid was also involved in the Tongo Tongo terror ambush that in October 2017 caused the death of four Nigerian soldiers.

He said Morocco adopted a global, integrated, and multidimensional approach in the face of the threat of terrorism.

Haboub also spoke about Morocco’s challenges in the field, saying that the return of Moroccan terror fighters constitutes “one of the greatest challenges for the BCIJ and the Kingdom.”

He said that 1,654 Moroccans joined ISIS since its emergence in 2014. Approximately 270 returned to Morocco.

The BCIJ handled “137 cases, that is to say, we succeeded in bringing 137 individuals to justice. Among them, 115 were active in the Syrian-Iraqi zone, 14 in Libya, plus eight other combatants who were repatriated by the kingdom, in coordination with the United States in 2019,” Haboub emphasized.

The BCIJ chief emphasized that like all other countries, Morocco is not safe from terror threats. “To put it clearly, we are never safe, and no country in the world can claim to be so,” he said.

He expressed that Morocco and all of its security services commit to working alongside partners in the fight against terrorism.

Since 2002, Morocco has dismantled 2,009 terror cells. The North African country also arrested 3,535 people for their alleged involvement in terror activities and aborted around 500 “bloody” terror plots in recent years.