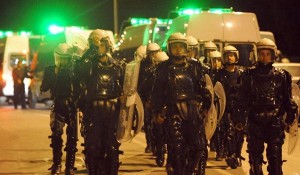 Morocco said it has broken up a “terrorist cell” linked to ISIL that authorities believe was planning attacks in the North of the country.

A statement from Rabat’s interior ministry said three suspects had been detained by police in the Northern cities of Oujda, Casablanca and Fez, The Daily Star reported.

It added that the cell members were linked to ISIL supporters “active in Syria and Iraq”.

The ministry said the three had planned to attack “sensitive and crucial sites” in several cities.

“The cell’s chief rented a safe house near to the city of Oujda, which was reserved for lodging and the preparation and manufacture of remote-detonated explosives,” the statement added.

A raid on the property uncovered chemicals that the ministry said could have been used to make bombs.

Rabat says more than 150 “terrorist cells” have been busted since 2002, including dozens in the past three years with ties to terrorists in Iraq and Syria.

A study by the US-based Soufan Group said last December that at least 1,200 Moroccans had traveled to fight alongside ISIL in Iraq and Syria in the previous 18 months.

In 2011, a cafe bombing killed 17 people, mostly foreign tourists, in the Central city of Marrakesh.

It was the deadliest attack in Morocco since the 2003 Casablanca blasts that killed 45 people, including 12 suicide bombers.