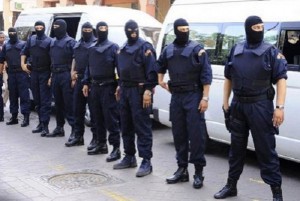 Morocco’s security services arrested on September 18 and 19 six new terrorists in relation to the Islamic State-affiliated terrorist cell that was dismantled on Sep. 12, the Interior ministry said Monday.

The arrested people, whose involvement in this terrorist plan was established, were active in Beni Mellal, the commune of Beni Zrantal (Khouribga province), the communes of Tagzirt and Foum Laânsar (Province of Beni Mellal), Sidi Allal El Bahraoui and Tetouan, the ministry pointed out in a statement.

Investigations revealed that these terrorist elements, who called their cell “Jund Al Khilafa in Morocco”, like the group carrying the same name in Algeria, which pledged allegiance to the “Islamic State”, were preparing to carry out terrorist operations in the Kingdom in order to sow panic among citizens, the same source noted.

These criminal elements, who attempted to prepare a remote detonation system though mobile phones, were planning a suicide attack against one of the prisons of the Kingdom in order to release ISIS prisoners, the ministry said.

The terrorist cell was dismantled on September 12 with the arrest of five members, who were active in the cities of Beni Mellal, Sidi Allal Bahraoui and Tinzouline (Province of Zagora), according to the same source.

Three members of the cell were arrested in one of the “safe” houses in Essaouira, the statement said, adding that authorities seized four automatic pistols, a machine gun, seven tear gas, three electric batons, a large quantity of ammunition, material that can be used in the manufacture of explosives and knives.

The members of this terrorist cell had planned to commit acts of targeted sabotage on the Moroccan soil before joining ISIS camps in the Syrian-Iraqi area.