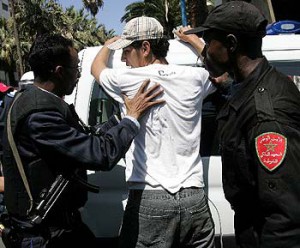 The arrests were carried out in a number of cities and towns in the North African country, the interior ministry said in a statement.

The nine were suspected of “spreading propaganda on behalf of Daesh, encouraging youths to join the group and training them to use arms and make bombs,” said the ministry.They were also accused of using the Internet to promote the ideology of Daesh, said the ministry, adding that they would now face justice.

In April, Moroccan authorities said they dismantled a cell in the city of Fez that was recruiting fighters for Daesh in Iraq and Syria.

The arrests came after extremists claiming to belong to Daesh killed 21 foreign tourists and a policeman in an attack on Tunisia’s Bardo National Museum in March.

Morocco, which is on guard against such attacks, prides itself on being a bastion against extremism with its anti-extremist unit and training of imams to preach tolerance. Recently, Moroccan police have arrested three Afghans suspected of links with extremists as they prepared to board a plane to Denmark, officials said on Wednesday.

They said the three men were detained on Saturday at Marrakesh airport holding fake Pakistani passports.

They were also carrying “suspect documents with extremists contents,” according to a statement issued by the interior ministry. With North Africa on high alert since the extremists beach massacre last Friday in Tunisia, the ministry said an investigation had uncovered an international recruitment network for extremists and that the three Afghans would appear in court.