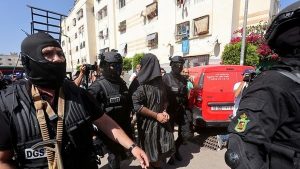 The four Moroccan men, all in their 20s, were detained in the northern city of Tangiers during a raid in which police fired warning shots, the Central Bureau of Judicial Investigations (BCIJ) said in a statement quoted by Arab News.

They were planning to “destabilize security in the kingdom… through terrorist methods inspired by operations” carried out by ISIS militants in Syria and Iraq, the statement added.

Bladed weapons and electronic equipment were also seized, it said.

The Organization of Islamic Cooperation (OIC) praised the vigilance of the security authorities and said it stands with Morocco in all measures it takes to combat extremism and terrorism to preserve its security, stability and territorial integrity.

Saudi Arabia’s Ministry of Foreign Affairs praised the ability of the security authorities in Morocco to thwart dangerous and imminent terrorist plots and to dismantle the terrorist cell aimed at destabilizing the security and stability of Morocco.

The Ministry affirmed the Kingdom’s support for the measures taken by Morocco to achieve security and stability and to combat extremism and terrorism in all their forms.

Morocco has been hit by jihadist attacks in the past, most recently in 2011, when 17 people were killed in Marrakesh, including Israeli citizen Michal Weitzmann Zikri and her husband Masoud Zikri, a native of Morocco.

Previously, an attack in the financial capital Casablanca left 33 dead in 2003.

In 2018, four suspects who pledged allegiance to ISIS were arrested following the murder of two young Scandinavian hikers in southern Morocco.

While Morocco has not been hit by terrorism in recent years, Moroccan authorities have arrested several suspects in connection with terrorist attacks in Europe.

In August of 2017, a man suspected of supplying gas canisters to a jihadist cell that carried out two terrorist attacks in Catalonia was arrested in Morocco.

A week earlier it was reported that Moroccan authorities had arrested two people suspected of links to the alleged perpetrators of an attack in Barcelona.